Why Are Worms Crawling Up The Walls of My Bin? Are They Escaping?

Nothing concerns a new worm bin owner more than when they see worms crawling up the sides of the worm bin, leaving them to wonder what they did wrong to cause this.

Unzipping the lid of your Urban Worm Bag or opening the top of your Hungry Bin to see what appears to be an escape attempt does bad things to a new worm parent’s psyche.

The good news is that worms on the walls are not necessarily a sign you’re doing something wrong.

This article will explain 4 reasons why worms will crawl up the sides of your worm bin.

This article is part of a “Vermicomposting 101” series of posts aimed at helping the beginning vermicomposter. To read other “VC101” articles on how to start a worm bin, how to choose worm food, how to maintain moisture, and the differences between composting and vermicomposting, please visit the Vermicomposting 101 section of this site!“

Why Are Worms Crawling on the Walls of My Bin?

1) Worms Really Are Trying to Escape 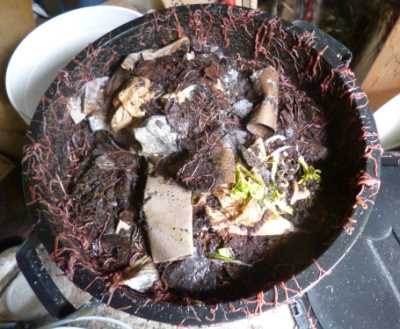 The worms may really be trying to get the heck out of Dodge.

But a mass escape attempt will look different than dozens of wandering worms. When worms get stressed and/or near death, you will often see them bunched up with one another.

Now, I’m not talking dozens. I’m talking hundreds or thousands of them.

If they are unhappy, you will see them gather near the opening of the bin, where the air is the freshest and coolest, all trying to escape at once.

Why is this happening? This is likely due to a lack of ventilation, overheating, or a chemical nature of the vermicompost that has become noxious to the worms. If the pictures you’ve seen so far don’t jive with what you’re seeing in your bin, then read on.

The news gets better!

2) Worms Are Attracted to Condensation 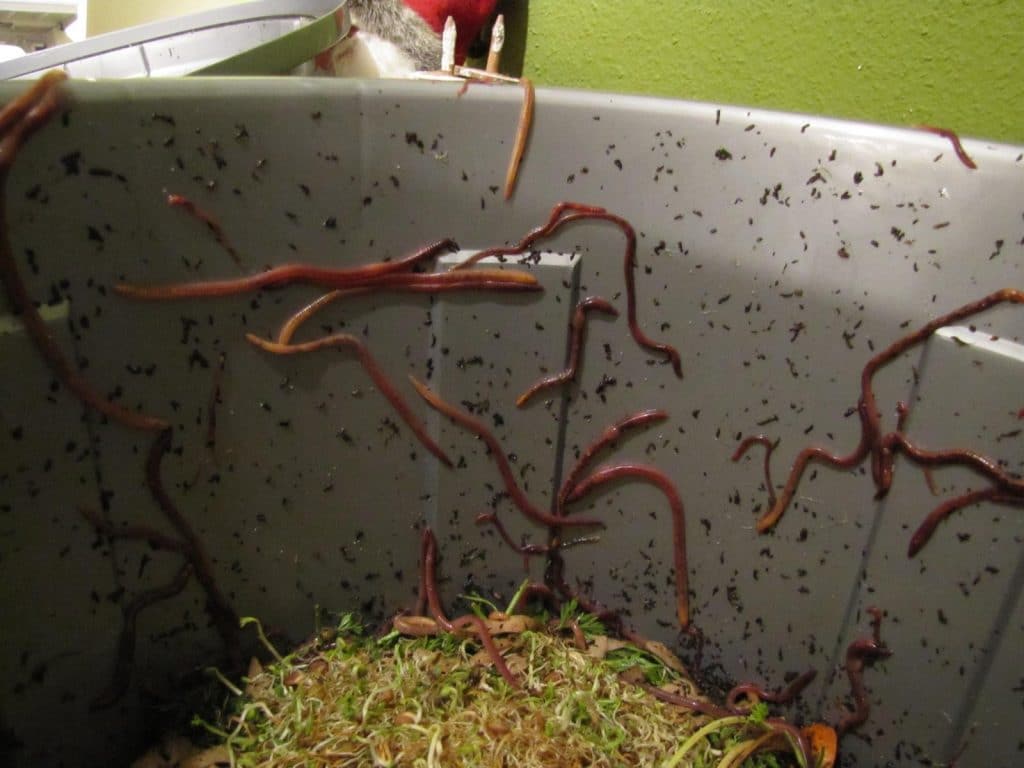 By far, the most common reason to see worms on the walls and underside of the lid of your worm bin is because condensation is present.

The air above your vermicompost, thanks to the heat-generating worms and microbes below, will often be warmer than the interior surfaces of your worm bin. When this warm humid air comes into contact with cold plastic or other surfaces, droplets will cover the inside of your bin.

Water is catnip for worms. And while you’d think that worms would be happier in a moist vermicompost full of food, don’t be surprised to see them happily wallowing in these droplets.

But the thing is, only some of them are going to do this.

So if the inside of your bin is wet, due to a recent feeding or a misting of your vermicompost, and you see a few dozen worms crawling up the sides, leaving their castings in their wake?

It’s normal and there’s nothing to worry about. I see this in both my Urban Worm Bags and with my Michigan SoilWorks CFT during the times of the year when we cover it to trap heat and moisture.

3) Worms May Be Reacting to Vibration

One of Charles Darwin’s observations about worms is that they are indifferent to sound, but can be highly agitated by vibration.

Utility rooms, which are common places to keep a worm bin, often have washers and dryers which will produce a constant vibration, lasting 45 minutes or more. You may find that worms will not be thrilled when your out-of-balance Kenmore washer hits the spin cycle. You can expect to see a less-than-peaceful worm bin.

Air handlers for central air conditions or window air conditioners can also produce a constant, but low-level vibration which can make the worms go a little nutty too.

4) Indian Blue Worms Are Reacting to Changes in Barometric Pressure

This next one is a little tricky.

If you notice that your red wigglers begin crawling the walls by the dozens or worse when a thunderstorm approaches, then your Red Wigglers may actually be Indian Blues. Although the perionyx excavatus Indian Blues are not that closely related to the eisenia fetida “Reds,” the two species are often confused.

Skinnier than the already-scrawny Red Wigglers, Blues can be identified by the tough-to-see clitellum which is flush to the body of adult and much closer to its head. Red Wigglers feature a fleshier, raised clitellum, distinct banding, and a yellow-tipped tail.

Now don’t get me wrong; Blues are excellent vermicomposters. But there is something about the onset of a thunderstorm that can make these worms get a little flighty and try to leave the nest. You know how your Aunt Millie’s arthritic knees tell her that a thunderstorm is about to hit?

It is unfortunately very common for a shipment of Red Wigglers to be at least partially Indian Blues. And to be frank, because Blues are excellent composting worms, most vermicomposters are happily unaware that they’ve got them. But if this is an issue OR somebody wants to culture red wigglers for sale, it can be maddening to learn that you’ve got the Blues, literally.

How to Prevent Worms from Crawling on the Walls

If worm climbing the walls is just unacceptable to you, there are a few ways to prevent it.

Keep Your Bin Less Moist with Lots of Dry Bedding

The food waste you’re likely using in your bin is going to feature a much  higher water content than you’ll want your worm bin to have.

So to keep the moisture content within a reasonable range (60%-80%), you’ll want to add dry bedding to your feedings to help sop up that excess moisture.

Read this article for more information on excellent choices for worm bedding.

Because you can equalize the temperature and humidity by keeping the lid or cover open, this is the most effective way to prevent the condensation that will attract the worms. In fact, worms are unable to climb walls that are completely dry as they would dehydrate quickly and wouldn’t make it that far.

Keep a Bright Light Above the Bin

This is a common worm bin startup tactic when worms are not yet acclimated to their surroundings, but it works well with a mature bin too. Worms find bright light repellent and will choose to remain in the vermicompost rather than venture out into the light. Whether you’re using an Urban Worm Bag, a Hungry Bin, or a Rubbermaid bin, one of those clamp lights shining down into the worm compost will do the trick!

Summary: Worms on the Walls is Probably No Disaster

Unless we’re talking thousands of worms trying to flee your bin at once, worms on the walls of your bin are likely no big deal. And if you’re using an enclosed bin, then I’d bet dollars to donuts that simple condensation is the likely cause.

If you’ve got worms on the walls and lid and you’re it’s something worse, feel free to e-mail me at [email protected] or post your comment below!