Coconut coir is often used as a worm and reptile bedding and the Urban Worm Company has used coco coir as the base layer bedding for the commercial-scale Michigan SoilWorks CFT.

What Is Coco Coir?

Coconut coir, often called coco peat, is an all-natural soil amendment made from the waste created from the harvest of coconut meat and milk.

In the context of a worm bin, coco pith (also called coco peat) is the form of coconut coir commonly used as worm bedding.

It features a fluffy, soil-like texture, yields a very attractive worm cast, and is a “low-risk” worm bedding assuming the coir has been rinsed to reduce the naturally-high salt content and electrical conductivity (EC). 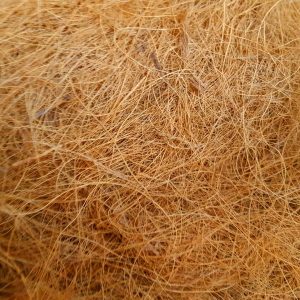 Coco fiber normally consists of longer strands of material and is used as a liner at the bottom of hanging planters. Coco fiber is not absorbent and will break down easily over time.

Because worms prefer a soil-like texture, coco fiber is not a good choice for a worm bin. 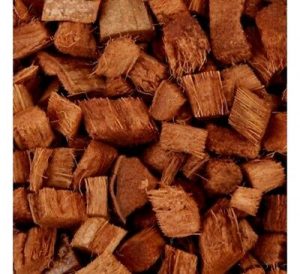 Coco chips are just that….chips that possess a very high particle size. This allows them to absorb large amounts of water, which may be useful in a planting medium.

But as they will not break down quickly, I do not recommend coco chips as your primary worm bedding.

Where is Coco Coir Made?

While the world’s top two coconut producers are Philippines and Indonesia, 90% of the world’s coconut fiber is exported from India and Sri Lanka.

The demand for coco coir is rising rapidly, but still less than 50% of India’s coconut husks are currently used for coco coir production. The rest is burnt as fuel in rural areas.

This should ensure ample supply – and low prices – for years to come, which is good news for consumers and agricultural producers who want to switch from sphagnum peat moss to coco coir.

What is Coco Coir Used For?

Coconut coir is an extremely versatile product. While most people consider it for use in the garden or to make potting mixes, it is a very popular worm bedding for worms, reptiles, turtles, even tarantulas.

Coconut coir is frequently used in composting toilets as well.

Why is Coconut Coir a Popular Soil Amendment?

Coco coir is popular because it is sustainable, inexpensive, normally pH neutral, and has excellent water retention capacity as a single 1.4 lb (650g) brick can absorb roughly 1 gallon of water. It will take a LOT of neglect for your roots to become dehydrated in a coco coir-infused growing medium.

In fact, if coco coir is the primary ingredient in your growing medium, you’ll want to add vermiculite to aid in drainage to prevent damp roots.

Coir is inert though, meaning there are no microbes or nutrients within it. This may actually be a benefit to some gardeners who want full control over the nutrient profiles of their soil and want to control it through other means.

Why Is Coconut Coir a Top Choice for Worm Bedding?

Coconut coir absorbs a truly remarkable amount of water, with a 1.4 lb (650g) brick easily absorbing just under a gallon – or 8.3 lbs – of water. While many customers on this site will consider coco coir solely as a worm bedding, it has wider use as a soil amendment, hydroponic growing medium and reptile bedding, making it attractive in a variety of outdoor and indoor uses.

While a worm bin needs to be damp at 50-60% moisture of higher, it’s not just the water absorbency that makes coco coir a great choice. In the first few days of a new worm bin, it’s important that the worms acclimate quickly to their new environment and worms find coco coir to be a very hospitable environment thanks to its fluffy soil-like texture.

While you can certainly start worm bins with plenty of other carbon-rich materials, starting a bin with coco coir is considerably lower-risk than starting with shredded paper. Considering the cost of a pound or two of composting worms, I try to steer people towards coco coir to ensure worm bin success

Do You Need Coco Coir for an Established Worm Bin?

I always stress that it’s not necessary to buy worm bedding. There are lots of free carbon-rich bedding choices like shredded paper and cardboard that can found in most any household. This article details some excellent choices for worm bedding, most of which are free.

But in lots of cases, it’s best to start with a material like coco coir with an excellent texture that will break down uniformly and can really get you off on the right foot with your vermicomposting bin. I started with shredded paper and killed my worms both times. While it wasn’t the paper’s fault, the wet paper didn’t really provide the same ready-made habitat for my worms that coco coir would have.

Use two bricks of coco coir to start an Urban Worm Bag. This will provide a good 8-12 inch layer of bedding!

Thanks to the high demand from Urban Worm Company customers, I decided to offer Urban Worm Coco Coir for 2022 and beyond.

And to entice you to try it out for whatever reason – worm composting, worm farming, composting toilets, or as bedding for reptiles and amphibians – we’re offering a 15% discount to customers in the US.

Use COIR15 at checkout!

Do You Need Bulk Coco Coir?

The Urban Worm Company can ship you pallets of bulk coco coir from our Savannah, GA warehouse

We can ship our 1.4lb bricks or our bulkier 11lb blocks which can expand to a whopping 2.25 cubic feet.

E-Mail us to inquire about bulk coco coir at discounted rates.

21 thoughts on “Guide to Coconut Coir: How is It Used and Why?”