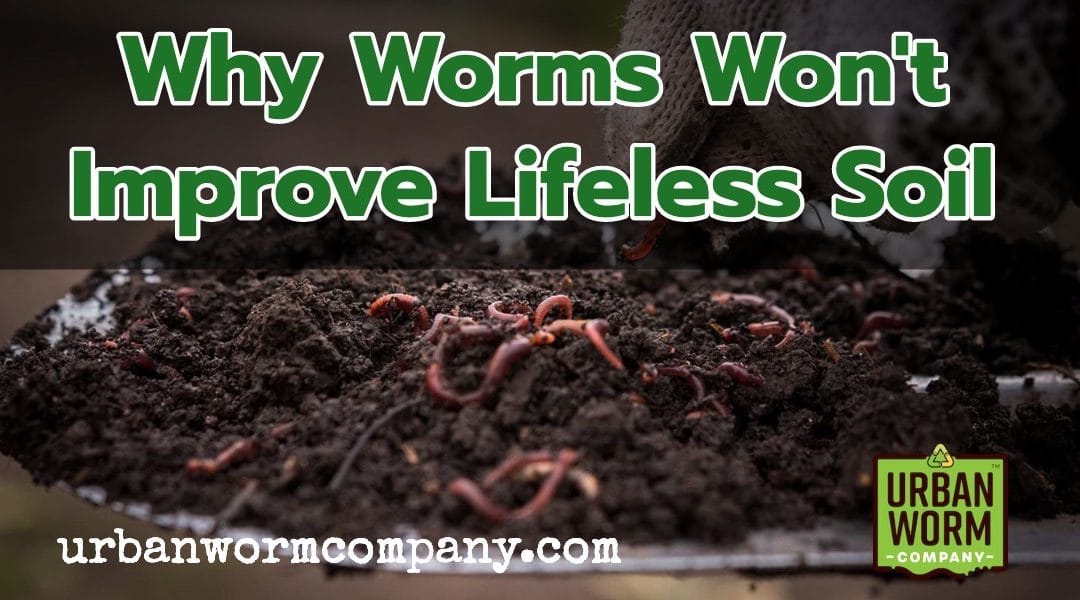 Without fail, we take at least one weekly inquiry from a potential customer who wants earthworms to help rehabilitate their soil. The assumption that introducing worms will bring aeration and life to compacted, lifeless soil is both reasonable and intuitive.

This article will discuss why worms and other organisms do not turn bad soil into good soil and why they are a symptom, rather than a cause, of good, healthy soil.

Before we discuss anything to do with earthworms or microbes in the soil, let’s explore what soil is made up of in the first place. A typical soil sample can be broken down into the following components: 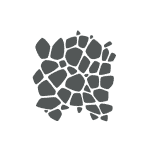 The inorganic matter that makes up the largest percentage of soil is comprised of mineral particles of varying particle sizes. These particles formed over thousands of years of rock erosion by wind, water, and air.

From smallest to largest, this inorganic matter is categorized as either clay, silt, or sand. The percentages of each will vary by region due to differences in geology, topography, climactic factors and more.

A healthy agricultural soil known as loam will consist of roughly equal parts (by weight) of clay, silt, and sand, allowing for both water retention and pore spaces for drainage as represented by the equal parts of air and water as represented above. 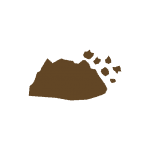 Definitions of “good” or “healthy” soil center around the tiniest fraction of soil; organic matter.

In short, regenerative agriculture practices help pump carbon underground where it is not only not harmful to the atmosphere, but is greatly beneficial to the soil and supportive of life.

Worms and Microbes Need Organic Matter, Just Like You 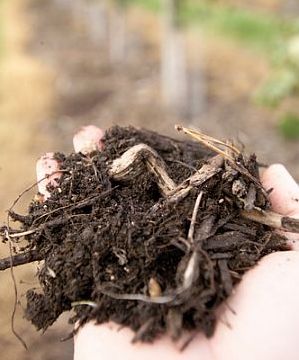 Whether you’re eating a diet high in fat, protein, or carbohydrates, your body will eventually break down these organic energy sources into glucose molecules, each of which contain 6 carbon atoms bound with hydrogen and oxygen.

In other words, you need to consume carbon in order to live.

Just like you, worms and microorganisms need carbon to sustain them. That carbon may come in the form of fresh plant detritus, actively decomposing plant and animal material, stable humus, or other living organisms. Bacteria and fungi break complex organic compounds into simpler compounds that can be more easily consumed by plants and microorganisms. Protozoa eat the bacteria. Nematodes eat the protozoa and other nematodes. Worms eat everything.

But none of this would happen without organic matter to get the party started.

In other words, the only way soil life is supported is through the smallest fraction of soil that we call organic matter. And modern agricultural techniques have, in too many cases, robbed the topsoil of this critical ingredient, reducing organic matter levels from 5% down to 1% or lower in some cases.

This is not a chicken or the egg scenario.

We know that organic matter must first be present for the worms to survive, let alone thrive.

Summary: If You Build It, They Will Come (To the Yard)

In the 1987 film Field of Dreams, Kevin Costner’s character is inspired by a voice saying “If you build it, they will come” to plow away a good chunk of his corn field to build a baseball field to summon the ghosts of the 1919 Chicago White Sox to play baseball there.

If you want to summons thousands of worms to your soil, you “build” good soil rich in organic matter.

Another pop culture reference makes this point, and if you’re familiar with the 2003 song Milkshake by Kelis, this will sound familiar. 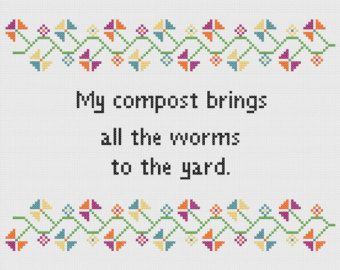 Indeed, your compost will bring all the worms to the yard!

Simply work in compost, leaf mold, manure, and other organic materials to your soil and eventually, worms and microbes will begin lining up for the buffet of goodies you’ve left them. Vermicompost is an incredible – if pricy – option as well.

Leave aside the fact that epigeic composting worms are not burrowing soil dwellers – epigeic is Greek for “on the soil” – it would be an incredibly expensive way to improve the soil even if it worked. With prices of red wigglers and European nightcrawlers topping $35-40 per pound at retail, the math just doesn’t add up.

Organic matter’s importance to the soil isn’t confined to its role as  food source for life.

It can store a shocking amount of water. Every 1% increase in organic matter will help store an additional 25,000 gallons of water per acre.

This water retention capacity prevents soil-denuding runoff which would rob the land of fertility and contribute  – along with synthetic nitrogen – to toxic algal blooms in our waterways.

Gang, I hope this makes the case that your lifeless soil can’t be improved by adding life. You have to add the food that can sustain life.

Add the organic matter, and the worms will come.