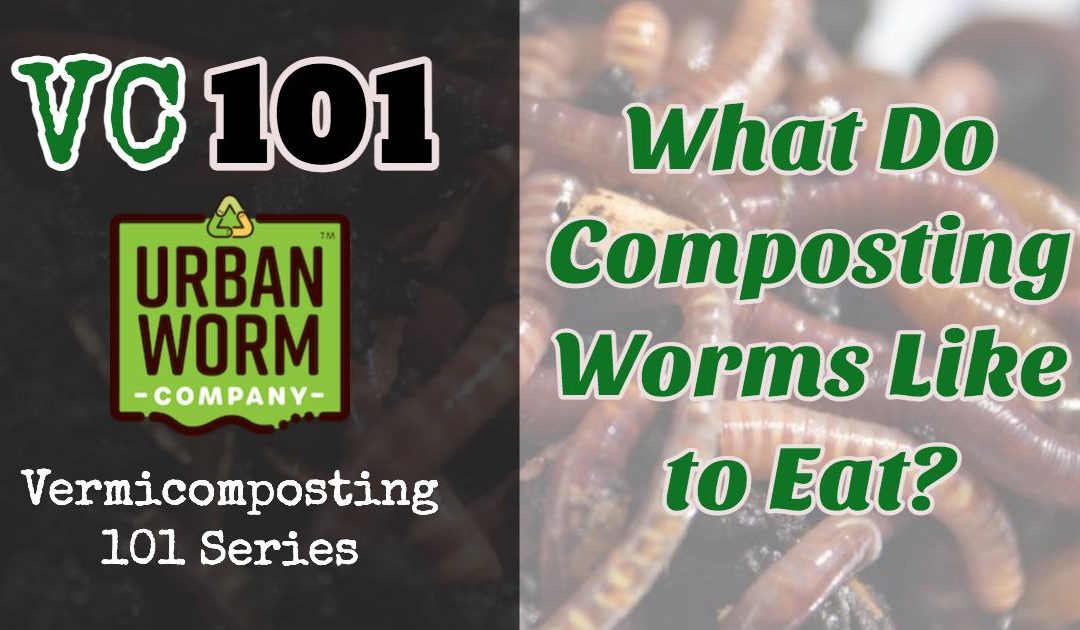 Worms eat organic matter. Anything that has been living eventually becomes worm food. That includes dead plant material, fruits, vegetables, and microbes, both dead and alive.

Even you and I would become worm food, given enough time and decomposition by nature’s other decomposers.

But the lack of space in home worm composting bins means we have to figure out what worms will want to eat right now or, at least, reasonably quickly.

The list below will detail foods that will be safe additions to any household worm farm, assuming the worms aren’t fed more than 25-33% of their own weight, daily.

We’ll also have a quick discussion at the end of what might be considered the “best” worm food as well as some final thoughts on the choice of worm food. 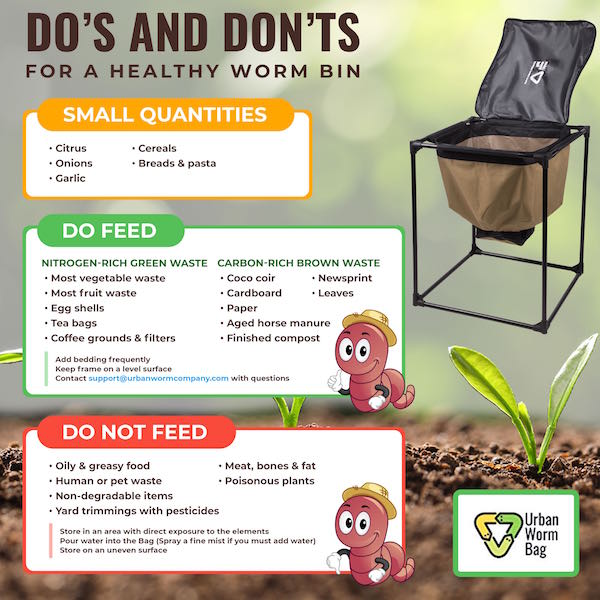 Pumpkins, Squash, Canteloupe and other Curcurbits 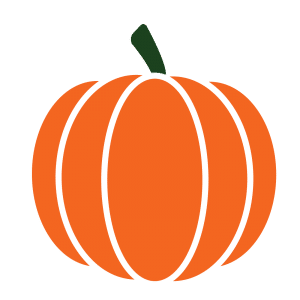 These fruits break down very quickly, are high in sugar, and lack the sinewy nature of plants like broccoli, so worms are quick to swarm them in your worm bin.

One note of caution.

Pumpkin and other members of this family are around 94% water!

A favorite past-time of vermicomposters in autumn is to watch how quickly worms will devour a huge helping of pumpkin.

But if you don’t add dry bedding to help sop up that moisture, the bottom of your worm bin will soon become a gunky mess.

Buying worm food shouldn’t be necessary if you are vermicomposting. But food waste and paper waste often do not provide enough protein to get fat, chubby worms.

Fat worms are important to bait sellers as well, so in order to add a little meat to their, uh, “bones,” you can supplement with a protein-rich mix of cornmeal, chicken mash, alfalfa, kelp meal, soybean hulls, and more.

We use this stuff when our worms need a little boost and it works wonders. 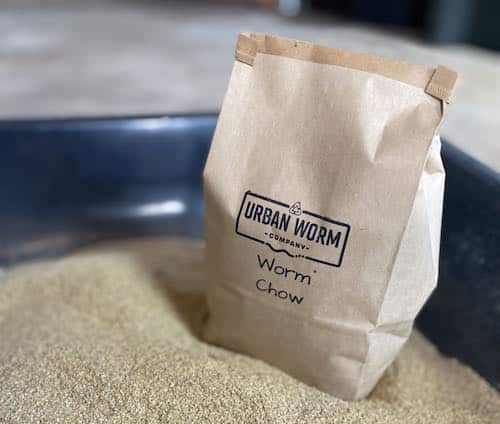 Some folks express concern over high acidity, but this is only true of unused grounds or the coffee itself in liquid form.

The coffee grounds themselves are pH neutral.

But they are also sterile immediately after being drenched with scalding water, so I find it takes a few weeks before the worms really move in on them.

Your local coffee shop will be more than willing to give you their spent grounds for free, often rebagging them and setting them out for customers to take, no questions asked.

A word of caution: Coffee grounds can dry a bin out, so keep an eye on moisture if you’re adding quite a bit of them.

Oh yeah….toss the filters in too! 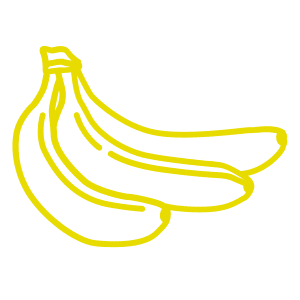 I like to lay banana peels flat on the surface of the worm bin (with the skin facing up) and come back a few days later and turn the peel over to find a cluster of worms beneath. This is also fun to do with cantaloupe!

Banana peels are welcome hosts for fruit fly larvae, and these eggs are often laid before the food waste ever goes into the bin. So for food wastes like banana peels which are generally considered safe to let sit for a few days, I recommend freezing them in order to kill off fruit fly larvae.

Another common fruit whose waste is perfect for the worm bin!  Yeah, yeah, I know the seeds don’t break down, but those can be sifted out later.

Apple cores break down quickly, so they’ll be gone in no time!

These are slightly more advanced because they can be harder to procure than regular food waste, but popular manures come from cattle, rabbits, and horses. Some folks use pig manure, but it is so liquidy and harder to handle that it’s probably not worth your time. 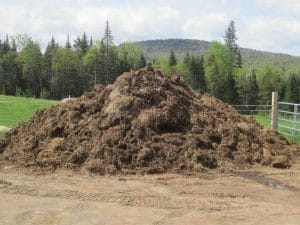 As a general rule, you will want to precompost most manures as introducing them to your bin, especially a closed system like a Rubbermaid bin, will result in overheating and a toxic environment for your worms.

I love horse manure as I find it is the least maintenance-intensive.

I can put the worms in a mixture of aged and semi-fresh horse manure and pretty much leave them alone. And the carbon-to-nitrogen ratio also allows it to be a serve as a bedding as well as a food, so I don’t find the need to add fresh bedding every time I feed. 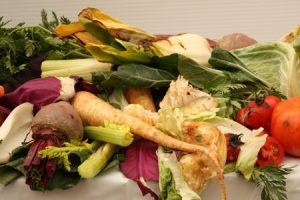 Yeah, yeah, this is a pretty huge category, but your worms will take to pretty much any veggie waste you create during meal preparation.  Carrot peelings, potato skins, broccoli and cauliflower stalks, lettuce, kale, even onion peels (in limited quantities) are perfect for the worm bin.

Vegetable waste like this isn’t prone to overheating your bin either, so this is another low-maintenance food.

These high-protein foods are generally used by people trying to fatten up worms for the purpose of selling them to fishermen. But a sprinkling of chicken mash and cornmeal can be an excellent supplement for a worm bin.

For my mid-scale vermicomposting operation, I will often sprinkle a layer of this “worm chow” over the surface of my continuous flow system to help boost the size and vitality of my worms.

What is the Best Worm Food?

What is considered “best” is highly dependent upon your reason for vermicomposting in the first place, whether it’s to achieve a zero waste lifestyle at home, to mitigate the removal of animal manures, or to create highly fungal worm castings, etc.

It is far less dependent upon what the worms will visibly swarm upon. 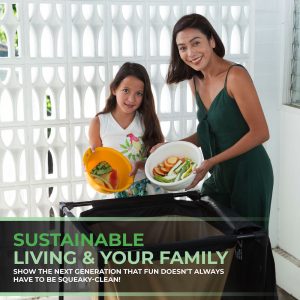 In this case, most any household waste that would otherwise go to the landfill is a great choice. In an urban environment, where conventional composting may not be an option, letting the worms eat a mixture of shredded cardboard and your own household kitchen waste is probably optimal.

It’s less about the quality of the castings, which may still be excellent, and more about recycling food waste, which is the heaviest food waste you produce. This makes vermicomposting a highly effective way to reduce your carbon footprint and contribute to a Zero Waste lifestyle!

If your objective is to manage the manure your animals are producing, then you might not want to waste vermicomposting capacity on household waste.

As large amounts of animal manures should be pre-composted before being fed to the worms, you could always add household waste to the composting manure and end up feeding the resulting, partly-finished compost to the worms. Horse manure has an ideal carbon:nitrogen ratio, but like all animal manures, it should go through a precomposting period where heat is released, mass is reduced, and the manure becomes stable enough to feed the worms. 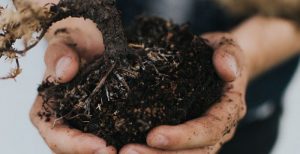 This is an interesting one. We often consider to be good worm food to be the food that worms appear to swarm around; pumpkins, melons, and highly-decomposed veggie waste.

These are typically high-sugar foods, and the worms gather around like kids might around a pile of Twinkies. But bacteria also love foods with high-sugar content, so these foods create conditions where bacteria will proliferate.

To create a more fungal compost, unsexy food like wood chips, decomposing bark, and woodier waste that resembles mulch – and may be even be mulch will provide the carbon sources that fungi can feed upon.

Final Thoughts on What to Feed Your Worms

Can You Put X in Your Bin?

One of the most frequently asked questions, especially for new vermicomposters, is “Can I put (insert whatever substance) in my worm bin?”

The answer is pretty much always “yes, depending on the size of your bin and the amount you plan to feed them.”

Toxicity is always a matter of dosage and while introducing something awful like battery acid or, more benignly, peanut butter to your worm bin wouldn’t be helpful, it doesn’t have to spell doom for your worms either, if in small quantities.

Should You Blend or Puree Worm Food?

Understand though that this process will quickly release water into your bin so ensure you add bedding every time you feed blended foods.

Should You Freeze Food Waste?

Understand though, that the processes of rupturing cell walls has the same water-releasing result as blending food waste.

Most fruits and vegetables are 80-90% water and freezing the foods causes this water to expand (as it becomes ice) and rupture the cell walls.

This will speed up the release of water as the food waste thaws.

Should You Add Bedding When You Feed?

Firstly, understand that bedding also gets eaten by worms. It doesn’t break down as fast as food waste though, which is why I consider it a “slow food.”

Secondly, this bedding also absorbs a lot of water. And because food waste has a MUCH high water content than the 70% your worm bin should have in total, you need to be adding bedding if you are adding food waste.

Feeding without adding bedding can lead to an overwet, overheating, and over-acidic bin.

See here for an article on some great choices for worm bin bedding.

Remember: You can easily have too little bedding. You can almost never have too much bedding.

I hope this was helpful guidance as you start – or continue – your vermicomposting journey.