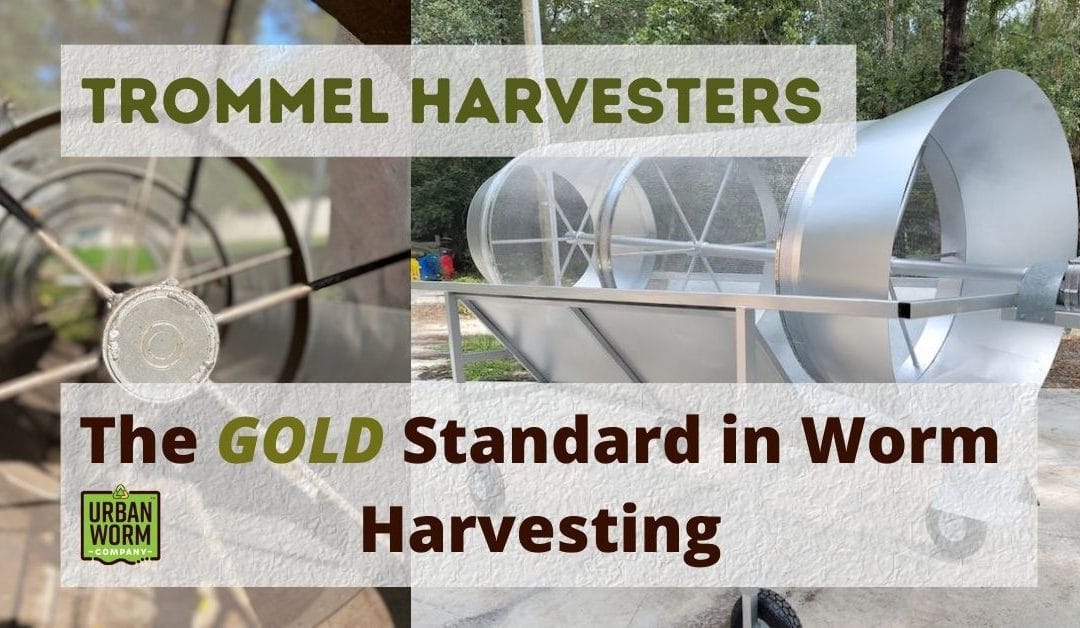 The process of separating worms and worm castings can be a long and tedious process. And if you're producing large quantities of the black gold, then it's simply a nightmare.

This article will explore why trommel-style worm castings harvesters are far and away the best piece of equipment you can own when it comes to efficiently harvesting worms and worm castings from a commercial-scale vermicomposting operation.

A trommel is a cylindrical wire mesh screen often used for separating smaller soil or rock particles from larger pieces. The trommel concept is elegant and effective.

An often-powered rotating screen allows for continuous screening operation. While the operator may need to perform some labor to feed the trommel or handle its output, the actual screening is a “hands-off” operation.

Unless the trommel is operated by a crank – as some DIY trommels are – the act of screening should place no burden on a human.

Trommels in vermiculture or vermicomposting operations will feature one to four screens. The most forward screens typically have a 1/8th-in aperture which allows for an end product that resembles coffee grounds. 1/8-in screens will keep nearly all worms and cocoons inside the trommel.

Rear screens are often 1/4-in mesh which produces a coarser end product and allows the passage of most cocoons and smaller worms.

Some operators might sequester the 1/4-in to use in soil mixes or even recycle back into their vermicomposting or vermiculture operations.

For smaller-scale needs, bins or a tarp may be placed under the trommel to catch the fines while the coarser material will make its way through the mesh cylinder where these overs will ultimately exit the end of the trommel.

Overs in a composting or vermicomposting context will often be reused by the operator as it still may have food value, carbon content, or a particle size that makes it a still-viable ingredient in the operation.

Double Duty: Why Trommels Are Ideal for Harvesting Both Worms and Worm Castings

There are 3 elements to vermicompost when it comes to screening: the fine particles, the coarse particles and the worms themselves.

There are some good options for harvesting worm castings, specifically. Equipment like the Brockwood Worm Shifter or the more expensive UNCO MK-11 Harvester are good for screening castings but not as effective when it harvesting the worms themselves.

But the circular motion of a trommel is what does the trick when it comes to harvesting worms.

As the vermicompost tumbles down a trommel, the fines, of course, will exit the bottom of the trommel while the worms and coarser overs will exit the end. But doesn't this leave you with the problem of separating the worms from the overs?

While trommels generally have a fixed diameter, trommels designed for vermicomposting operations will feature an aluminum cone affixed to the end. This cone will start with a diameter identical to the trommel itself but this diameter will expand as the cone protrudes outward from the trommel.

What happens is that the worms will tend to stick to the upward-moving side of the metal mesh and aluminum cone.

The video below, courtesy of Green Greg's Garden & Worm Farm, shows this in action on his DIY trommel.

The link skips straight to the point where Greg explains, then demonstrates, how the worms stick to the upward-moving end of the cone, which allows them to drop into a separate tray. The entire video, however, is worth a view!

So the operator can effectively separate fine castings, coarser vermicompost and worms all at once.

This natural separation is made possible by rotation that can only be found in a trommel-style worm screener.

How to Harvest Worm Castings with a Trommel

Vermicompost habitats are often comprised of 65-75% water content. This is too moist for effective worm castings harvest.

At these moisture levels, the tumbling, fine particles will adhere to one another, snowballing into aggregated chunks. And these will not pass through the fine metal mesh featured in most trommels used in vermicomposting operations.

To make for crumbly, friable – and thus screenable – vermicompost, the should must be dried to a moisture content of roughly 40-50% before screening. This moisture level will still support life in the form of worms and microbes but will be dry enough to achieve maximum throughput of a trommel without snowballing.

(At 40%-50% moisture, the vermicompost will not yield any drops of moisture when squeezed and will not even stock together.)

Simply laying out the vermicompost to dry under a fan for a day or two – and turning it periodically – is sufficient to dry the material.

Check out this article to learn more about measuring moisture in your vermicompost.

Except for the largest operations, feeding a worm harvester is a manual process. Most trommel worm screeners are small enough to be fed by a single adult using a shovel or a bucket.

Larger operations may use a small, pitched conveyor to feed the trommel with a minimum of manual labor.

The openings of trommels are typically smaller than the body of the cylinder, helping to keep the vermicompost contained inside the trommel and to prevent spillage. But this smaller opening can make the feeding a little awkward for a manual operator who wants to prevent dinging up his new toy with a shovel!

Handling the Fine Material from a Trommel Harvester

Like most smaller operators, at the Urban Worm Company, we get away with a rudimentary method of catching and handling our fines. We use a series of mortar trays to catch the fines which allows us to replace full trays with empty ones as needed.

Other smaller operators may use something as simple as a tarp to catch the fines.

For sophisticated, large-scale soil operations, conveyors may be placed underneath the trommel, removing the finer particles from underneath the machinery.

This screened soil may be sent to a pile for storage or sent directly into commercial bagging equipment.

Handling the Overs from a Trommel Harvester

Very little is – or should be – wasted in a vermicomposting or worm farming operation. Whereas soil excavated from a construction project may have plenty of waste to be discarded after screening, virtually of the material in a worm farm can be reused.

Obviously worms and cocoons that exit the trommel as overs should be recovered. But unprocessed food waste, wood chips, and coarser stuff should be treated as valuable organic matter to be used again!

The country's sole remaining manufacturer of trommel-style worm harvesters is JetSpeed Compost, located in Carson City, NV. They make a beautiful line of screeners and conveyors, saving huge amounts of labor for a growing worm business.

But this labor savings comes at a significant capital cost as the base price for their smallest harvester is over $4,100, a price that is surely increasing due to the effects of COVID-19 on the supply chain.

Once you add in options like a variable speed motor and then pay to have the machine crated and shipped, the cost likely doubles.

My partner supplier, Meme's Worms, has a limited number of newly-refubished trommel-style worm harvesters in Valdosta, GA. These trommels were purchased from a former manufacturer in Mississippi and transported to South Georgia where Samantha and her team performed the following repairs and refurbishments:

Meme's has worm harvesters in the following sizes:

Check Out Trommels at Meme's Worms

Trommels: The Multiple Tool Athlete for Worm and Castings Harvest

For you baseball fans out there, you're probably familiar with the 5-tool concept; a player might excel at hitting, hitting for power, running, fielding, and throwing. The rare ones are good at several at a time.

Jose Canseco hit for power and stole lots of bases for a few years. Same for Bobby Bonds and his son Barry. Ken Griffey Jr and Willie Mays are considered some of the best “5-tool” players out there.

This analogy may be a bit of a stretch, but a trommel harvester for worms and worm castings is the multiple-tool athlete in a commercial vermicomposting or worm farming operation.

You can count on a powered trommel harvester to deliver the following:

The initial downside is, of course, the upfront cost.

But if you're serious about scaling up your worm business, then a trommel is the closest thing to a must-have piece of equipment that you can buy.