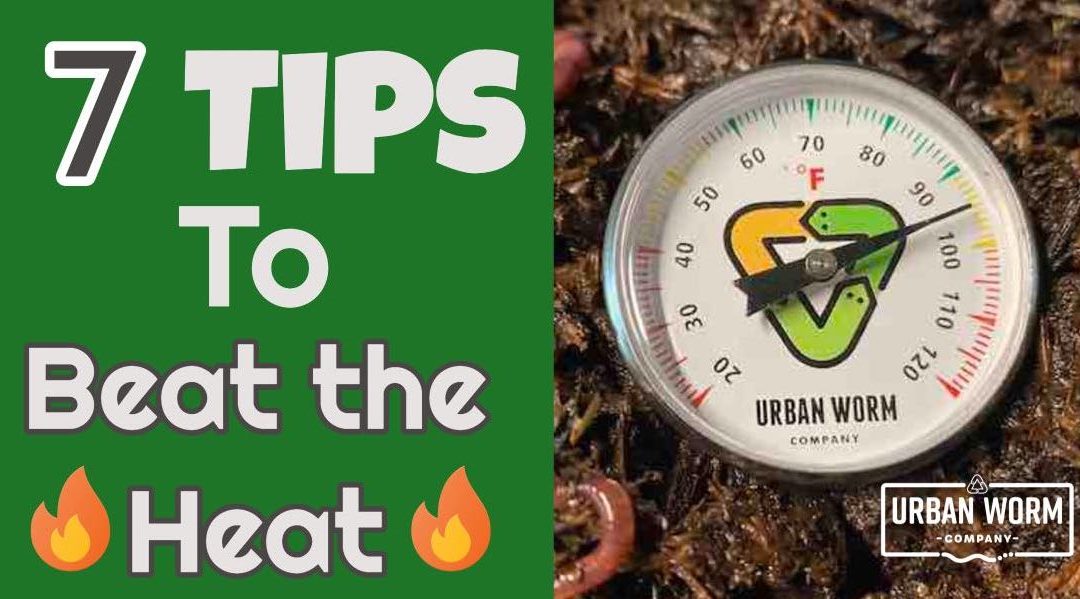 Worms may be simpler creatures than humans, but they need what we need: food, water, and protection from predators and the elements.

One of these elements – heat – is cause for concern. And it’s far worse than cold for the health of your worms.

Even for indoor worm bin owners, the summer heat can cause problems.

This article will touch on why excess heat is far worse than excess cold and what you can do to keep your worm bin cool in the hot summer months.

Hot Vs Cold in the Worm Bin: They’re Not the Same

Most composting worms are best kept in the 72°-80°F range. And the accepted conventional wisdom is that worms will be fine between 55°F and 90°F.

You may envision a bell curve where the peak performance of the worms is at 72°F. You might expect a slow and symmetrical decline in performance in either direction like the image below.

This is NOT representative of how temperatures will affect your worms.

If you go below 55°F, what you’re likely to find is that worm reproduction and waste consumption declines slowly, eventually grinding to a halt. At temperatures near freezing, a full 20+ degrees colder than 55°F, the worms might survive.

Interestingly, the cocoons will almost surely survive as cocoons stay in viable in frozen material, ala Hans Solo from Return of the Jedi.

But if your vermicompost gets more than 10 degrees warmer than the 90°F limit, things go south in a hurry.

Unless your worms have somewhere to retreat to, you can expect all of them to die very quickly.

So here’s what you can do to manage high temperatures in your worm compost bin.

How To Keep Your Worm Bin Cool in Summer

You read that correctly.

If you’re on my e-mail list, you may remember an e-mail I did about keeping a worm bin warm in winter. Part of this post dealt with the concept of the natural insulating properties of a large worm bin.

While the outside temperatures are a big deal, what really matters is the temperature inside your vermicompost.

A nice, large full worm bin will provide a damping effect against temperature extremes due to thermal mass, ie, the ability of the material to absorb and store heat. Obviously, larger worm bins like the Urban Worm Bag can help provide more of this damping effect due to the higher volume.

The graphic below shows how thermal mass works to buffer against temperature extremes. The blue line represents the temperature inside your vermicompost.

#2 Keep Your Worm Bin In a Shady, Ventilated Area

This is kind of a no-brainer, but if your bin is subject to direct sunlight, you’re going to have a much tougher time keeping it cool enough. Get it into an area where it won’t experience direct sunlight, especially in the middle of the day.

Also, try to place it in an area with plenty of ventilation to draw excess heat away from the bin.

Believe me, I have many Urban Worm Bag customers who experience great results on shaded porches in Texas.

The introduction of nitrogen-rich food waste into your worm bin can stimulate microbial activity which can raise temperatures in your bin.

I’m not talking about preventing full-on thermophilic hot composting. I’m talking about the mild increase in temperature that occurs after a rich feeding.

To reduce the risk of sending temps into the high-90s in hot weather, consider dialing back your feeding which will dial back the microbial activity.

And no….you will not starve your worms. You could stop feeding them today, forget about them for weeks on end and they’ll survive.

Lots of folks use this handy little trick which is to place frozen water bottles on (or in) their vermicompost.

The effect is temporary and you’ve got to stay on top of it, but this seems to work for lots of vermicomposters.

If you go this route with a storebought water bottle, drink a few sips out of it before freezing or the expanding ice may rupture your bottle.

Note: Do not add actual ice to your vermicompost as that would get your bin way too wet…and likely too hot as well!

Hint: Cooler packs are a great idea too!

This will work better in a more arid climate like Colorado or Arizona. Evaporative coolers work better when there is a significant difference in humidity between the drier outside air and the more humid, cooler air you’ll be trying to push into your bin.

I have not yet tried this technique, but I have some readers in the Southern and Southwest US who swear by it!

Many thanks to longtime reader Shaul for this handy bit of advice.

If you can’t shield your worm bin from direct sunlight, then deflect it with a solar reflective cover.

While there are no off-the-shelf solutions for bins like the Urban Worm Bag (yet), you can buy an inexpensive roll of reflective material and drape it or cut it to fit over your bin.

We’ll put this one in the “No Sh&t, Sherlock” advice category, but if your housemates can tolerate having your buddies indoors at least for the summer, then this is your best option.

To keep the peace with your worm-skeptical co-habitants, it may be best to scale the feeding way back to reduce the risk of fruit flies and other critters.

If you want your worm bin out of sight, then basements and utility rooms are great places for them!

“Work with nature” is a common mantra in composting circles and in most cases, that mindset can lead you to success with vermicomposting.

But if you’re working with a manmade worm bin, then sometimes you need manmade help to harness the natural wonders of worms.

How are you guys keeping your worm bins cool? Let me know in the comments below!

Read the Ultimate Guide to Vermicomposting