Vermicomposting 101: Should I Mix Worm Species in My Worm Bin? 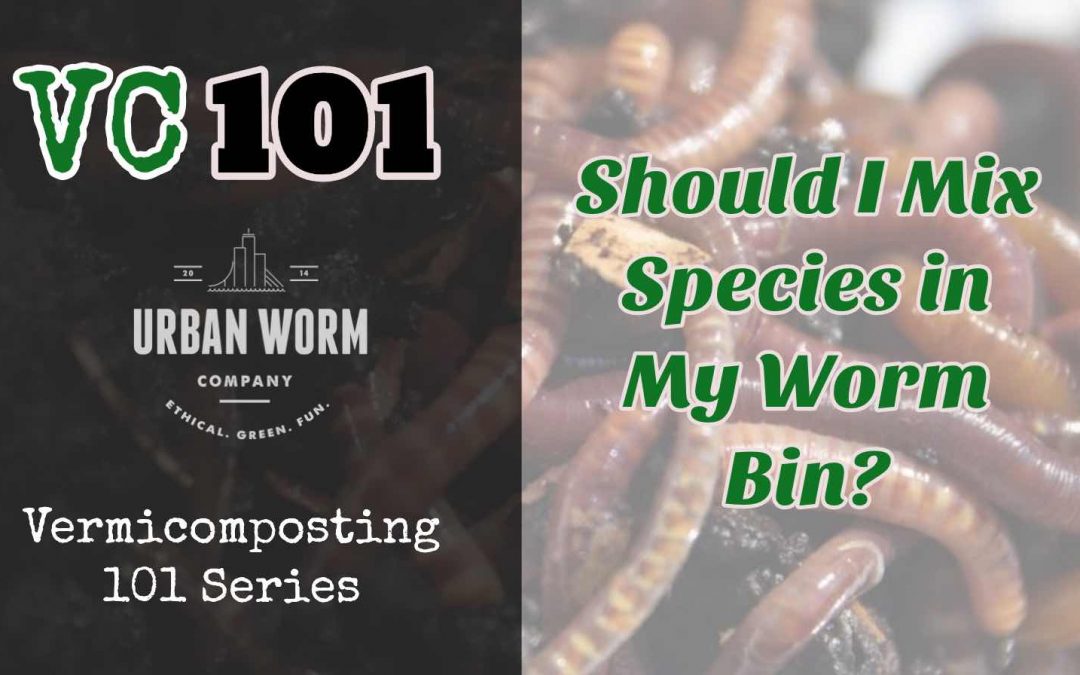 As the season swings into gear, I am commonly asked the question “Should I mix earthworm species in my worm composting bin?”

I have my own thoughts about that, but before I give you my general recommendations, let’s explore the cases for and against mixing species.

Why to Mix Species in Your Worm Bin

You Want To Mix Species to Vermicompost at Different Depths

As I am pretty much a run-of-the-mill red wiggler man, I do not have a particular opinion as to whether this is true. If it is, then this is a fine reason to mix species. But I have also seen red wigglers way deeper in a wet, compacted worm bin than I thought I should find.

So it might make sense to include a variety of species so if you have weather patterns like Philadelphia which goes from well digger’s ass cold to Satan’s armpit-level hot and muggy in an instant.

At either of those ranges, at least one of your species is happier than the others, although it’s worth pointing out that none of them will be happy at the extremes.

Our Diversity is Our Strength!

Like most ecosystems, a greater diversity of organisms portends good things. Much like the temperature argument above, a robust variety of species may withstand shocks to the system better than a single species.

Applying this principle to your choice – or choices – in worm species might make sense if you think several worm species is better than one.

Why Not to Mix Worm Species In Your Worm Bin

Contrary to some wives’s tales, worms cannot interbreed or hybridize.

But this does not mean that worms are unaffected by the population around them.

Worms are excellent self-regulators and will slow their reproduction when the population density reaches a certain level, ultimately maxing out at 2-3 lbs per square foot (maybe a bit more), depending on the conditions in the bin.

Below a certain density – I’m not sure what it is, but I reckon it’s around 1 lb per square foot – the opportunities for a love connection are reduced as well, so if you stock a 4-square foot bin like the Urban Worm Bag with 1 lb of red wigglers and 1 lb of European nightcrawlers, your worm density may be 1/2lb per square foot, but the density of the worms that can actually breed with one another is 1/4 lb per square foot, less than optimum if you’re trying to grow your population quickly.

You May Already Have Multiple Species In Your Bin! 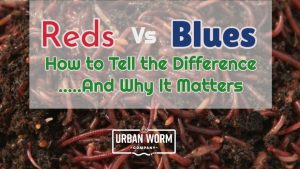 Gasp! Well it may be true.

Worm bin owners may be surprised to know that what they thought were purely red wigglers in their worm bin were actually a different species called the Indian Blue. Although similar in form and function to a red wiggler, the Indian Blue mixes its voracious composting ability with an annoying tendency to attempt a mass escape from the bin for seemingly no reason.

This helpful article will teach you the similarities between “reds” and “blues” and will help you to be able to tell the difference!

There is absolutely nothing wrong with multiple species in a worm bin, but I can’t find a compelling reason to say you should. Of the arguments for intentionally introducing mixed breeds in your bin, the depth issue is the most convincing.

But I’m not convinced.

The species purported to burrow the most deeply is the African nightcrawler. But it is still an epigeic, top-feeding species and despite its size, I don’t think it is an appreciably better burrower than the red wiggler.

And this may sound like heresy, but the diversity argument isn’t convincing either. A healthy worm bin has huge and diverse microbe population. While diversity is generally a good thing, I don’t consider a different flavor of worm poop to be meaningful diversity.

So while I fully support anyone who is experimenting with different breeds, there’s nothing screaming at me that says it’s a better way to vermicompost and the purported upside to me just doesn’t outweigh the added cost. Take the money you would have spent on two separate pounds of worms and just buy 3 lbs of a single species like the red wiggler for the same price.

If you liked what you read here, I invite you to join my e-mail list below and read the rest of my Vermicomposting 101 Series.