Whether you just want to increase your vermicomposting capacity, you are planning a vermicomposting or vermiculture business or have one in operation already, you’ve probably asked yourself the following question.

“How can I make my worms reproduce faster?” 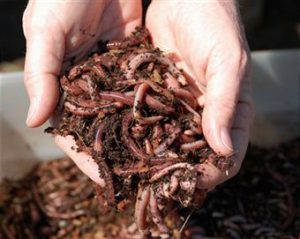 I’ve noticed most attempts to answer this question center on very common guidelines concerning moisture and temperature. No doubt, these two factors are crucial.

But it’s just as important to keep worm density in mind. Speaking from experience, I can attest that maintaining a nice 60-70% moisture level and 77 degrees but stocking a 2.5 square foot grow bin with a half pound of worms is going to give you disappointing results if you’re trying to grow your worm herd quickly.

To be honest, without actually removing and weighing your worm biomass, I don’t know how to tell you exactly what 1 lb per square foot looks like in your bin. But you can always start fresh with a new bin making sure to stock at the minimum density for your container.

I took this more deliberate approach this spring and the results have been wonderful, maybe too wonderful. Not only am I splitting grow bins much faster than I anticipated, I am also adding the excess biomass to my vermicomposting beds and am now processing aged horse manure at a rate so fast that I cannot harvest the castings quickly enough given my rudimentary equipment and limited time.

In short, my attention to stocking density and willingness to experiment with more and more worms has led to much faster reproduction than I was getting before.

There is one caveat though. If you are unwittingly stocking your grow bins with worms of different species, you will be achieving less-than-optimal reproduction. It’s pretty common that you are ordering red wigglers (eisenia fetida) from certain suppliers and receiving a mix of reds and Indian Blues (peronyx excavatus) or European Nightcrawlers (eisenia hortensis), which will appear the same to a beginner.

As there is no interbreeding between species, if you stock your bin with ½ lb per square foot density with a 50/50 mix of reds and blues, your effective worm density for reproductive purposes is only ¼ lb per square foot. Your vermicomposting performance will still seem unchanged with a mix of species but your reproductive performance will suffer.

So you should err to the high side when stocking your bins unless you’re sure you’ve got all the same species.

This leads into the question of when to remove excess worms from your grow bins, either to sell or start a new bins with. As I mentioned earlier, it takes someone with much more experience than I have to say “It looks like I’ve got about a pound and half per square foot of worms in here” and even then, it’s going to pretty inexact.

But a telltale sign that Larry Shier on Facebook pointed out – which I’ve observed this summer – is that when individual worm size starts to shrink, it may be time to split your bins. What look like a bunch of juveniles may actually be a bunch of small adults (adults are identified by the presence of a clitellum) who, due to limited space, aren’t attaining their potential size.

A reduction in size certainly accompanies and I suspect possibly precedes a reduction in cocoon production and worm reproduction.

One way I like to harvest the excess worms is to place a decent chunk of melon or pumpkin facedown on the surface of the grow bin and return the next day. I remove the food and typically find a solid layer of worms lined up for the buffet. I do this with 5 or 6 grow bins at a time and literally just grab a handful from each and move them to a new grow bin, again making sure that the new bin gets enough worms to meet my ½ lb per square foot standard.

Another way is to fill an onion bag full of the aforementioned and worm bait and bury it within the first 3 inches of your bin.  Give it a day or two, return to your bin, observe a nice cluster of worms and simply remove the bag and either A) empty the contents into another bin or B) just place the bag itself in another bin.  Once the worms finish getting what they want in t 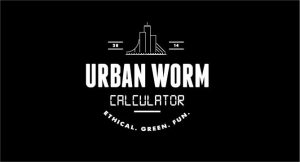 here, they’ll find their way out.

Well that’s it for now. If you’re curious how quickly your worms will reproduce or how much waste you’ll be able to process, the Urban Worm Calculator can figure that out for you and help you plan your future, months out.

To see the calculator in action, check out my tutorial videos or read the Urban Worm Calculator Guide. If you have questions after that, e-mail me at [email protected] or leave a question in the comments below!