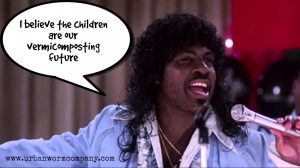 I got an interesting phone call for some worms last week. A lady we’ll name “Jennifer” said her daughter was assigned vermicomposting as a subject for a science experiment in her 7th grade class in Philadelphia. And she needed worms, pronto and didn’t have time to buy them online.

“Awesome!” was my response.

She didn’t share my enthusiasm.  Jennifer was not quite thrilled with the idea of having yucky worms in the house or what to do with them when the experiment was through. When I asked how many worms she needed, she said “About 30?” I thought she meant pounds. Nope.

30 worms. Which were to be “split between 3 bins or something.”

Now it’s tough to give a 5-minute tutorial on worm composting to someone who is completely new to the topic. But I told her the minimum she would need is probably a half-pound and that all the worms would need to be in one bin to see any real vermicomposting action. So we arranged a time to meet and I headed out to the barn for a quick harvest of both worms and castings for her to take with her. I also printed out the Urban Worm Care Guide for her to take to get her started.

When she arrived, we made some small talk and she mentioned that she was really just getting into organic gardening. Now it would have been untoward of me to rub my hands together in front of her, but it was exactly what I wanted to do. This is exactly the kind of person Urban Worm Company is trying to reach! So what was supposed to be a 5-minute transaction in the driveway turned into a 30-minute tutorial on how worms actually consume food scraps and how their castings are an awesome fertilizer. Her enthusiasm level grew a bit when I actually had this stranger with a Louis Vitton clutch smell a bag of worm castings in my kitchen (ß This is not a sentence I ever thought I’d write). I told her all she’d need to start her worm bin and gave her a quick list to take to the hardware store and before I knew it, she was skipping back to her car, ready to get her supplies and prepare the bedding for her new buddies.

She said her daughter was really excited to do this and that now she could actually see her household continuing vermicomposting after her daughter’s science project was complete. 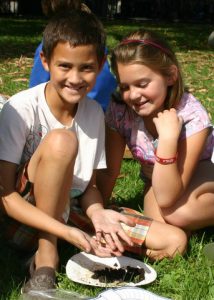 Jennifer’s visit rekindled some motivation in me to reach out to area schools to promote vermicomposting. School classrooms are an ideal environment for worm bins for many reasons: a daily food source, constant temperature and humidity, and 20-30 potential vermicomposters who will provide the attention these bins need. And the low costs of starting a classroom worm bin should appeal to the growing number of schools with shrinking budgets. I’m trying to figure out any downside to doing this.  Stay tuned . . . .