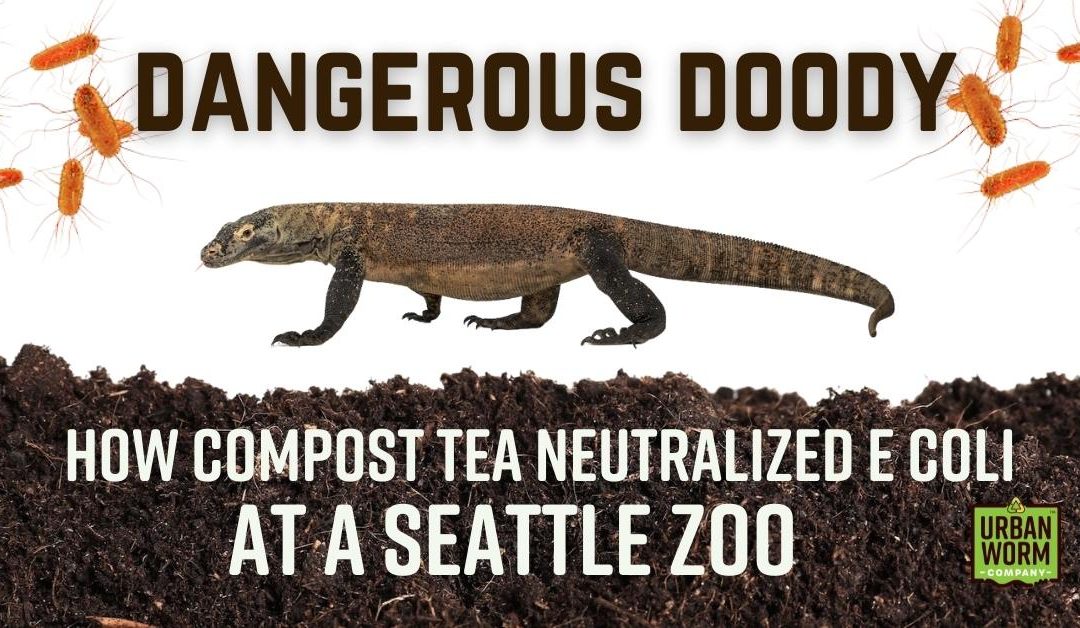 That is, until the zoo brought in beneficial microbes through compost tea to save the day!

Now this Seattle-area zoo is using soil biology in all of their animal exhibits, saving them at least $2,000,000 over the course of a decade.

As opportunistic carnivores, they will eat whatever they can take down.

These apex predators prey on anything from bird eggs and monkeys up to deer, horses, and even water buffalo. In the wild, they mainly eat Javan rusa, a type of deer, plus large amounts of carrion.

Feeding on nothing but large amounts of flesh can cause some issues when it comes to excretion.

The dung buildup from the Komodo dragons in the Woodland Park Zoo caused toxic levels of Escherichia coli, commonly known as E. coli.

Upon testing, the readings of E. coli were in the hundreds of thousands of colony forming units, or CFUs.

The recommended levels are in the hundreds.

Zoo staff had to remove five cubic yards of toxic substrate by hand per year, with only a tiny gate to access the area.

The cleaning crews wore full hazmat suits while enduring hot temperatures in summer months. The noxious substrate was picked up and taken from the area via shovels and five gallon buckets.

Their bucket brigade would fill up bucket by bucket and send them along a human chain, creating a hefty amount of work for multiple zoo staff. The zoo estimates they removed 170 to 180 buckets of material each time.

The huge expense of dealing with the Komodo dragon display was diverting funds that could have been used on conservation for other species in the zoo.

The financial burden went further than the removal of substrate and manure.

The exhibit was losing costly tropical plants due to the toxic environment. Paying for the annual replacement of these plants was becoming an issue in itself, although gaining control of the E. coli was obviously the first priority for the zoo.

As a non-profit, Woodland Park Zoo relies on donations to fund its expenses.

When any of the attractions are less than pleasing to the eye or nose, it can be difficult for potential donors to want to reach for their wallets. Any additional expenditures for a particular display really start to tug at the budget, leaving fewer animals helped.

They desperately needed a cost-effective answer for the Komodo dragon exhibit.

In the early 2000’s, Woodland Park Zoo started incorporating compost teas into their exhibits to benefit the health of their plants. Matt Slaughter, owner of Earthfort in Corvallis, Oregon, worked with zoo staff to set up compost tea brewers and train them on the brewing process.

At some point, someone came up with the bright idea that compost tea could be a possible solution to the Komodo dragon exhibit’s E. coli problem!

What’s the harm in trying?

Getting Through The Red Tape

It took 18 months from the initial discussions about using compost tea in the Komodo dragon project until full approval for the experiment.

What was the issue?

The Komodo dragons were on loan from the Indonesian government.

Such a project required sign-off from the many people involved including animal handlers, horticulturists, and other zoo staff, along with government officials.

After a year and a half, Woodland Park Zoo officials finally got the go ahead.

In order to test the efficacy of using the compost tea in this way, the zoo staff began by using merely a couple of gallons of compost tea to treat the substrate in the Komodo dragon display. The test area was less than 1200 square feet.

Within a week, after only that one application of two gallons of compost tea, the E. coli was reduced to safe, manageable levels.

One application, one week! Can you believe the power of microorganisms?

Woodland Park Zoo has continued the use of compost teas and biological products ever since.

At first, weekly applications of compost tea were used on the Komodo dragon exhibit. After continuous testing, officials concluded that they only needed monthly compost tea applications.

The zoo then switched to quarterly applications and now, they only apply as needed!

Benefits Beyond the Komodo Dragons

The Komodo dragons weren’t the only creatures to benefit from the compost tea applications.

The health of the animals improved immediately along with that of the flora used in the habitat. Plants didn’t have to be replaced frequently within the exhibit. Employees no longer needed to be dressed in full hazmat suits just to enter the display. Now, they could practically wear beach attire into the exhibit without issue.

The substrate in the Komodo dragon exhibit was eventually switched from a mix that was heavy in organic matter to a substrate that is mainly sand, allowing for better drainage. Zoo staff went from removing and disposing of five yards of substrate per year to removing zero amount of substrate.

Minimizing the workload, along with no longer needing to pay for the disposal of this material, was a huge cost savings.

That is a lot of funding that can now go towards conservation and preservation, increasing reach to even more animals.

Improved Health of Flora and Fauna

As a result of the harmful environments, Woodland Park Zoo had been bringing in a truckload of tropical plants from Florida once a year. This many plants were needed to replace all that were lost in exhibits experiencing harmful, anaerobic conditions. The zoo now requires only a few plants to be replaced on an as–needed basis.

Growing tropical plants in a temperate climate can be difficult because of pests and diseases that exist in temperate zones but are not present in the plants’ natural environment.

Other zoos and greenhouses experience issues with pests such as mealy bugs, scale, aphids, and spider mites. But Woodland Park Zoo’s regular use of compost tea on plants and habitats has resulted in healthy, pest-free plants.

After the success with the Komodo dragon display, the zoo decided to try compost tea out on their ocelot exhibit. The stench of the cattery was so vile that visitors to the zoo could not bear to enter.

We all know how nasty cat pee is. Well, ocelots have the strongest urine signature of any cat.

Like other felines, they use urine to mark their territory. Subsequently the odor had become so strong that it was keeping visitors away from the exhibit, and the urine was also causing an issue with plant health in the display.

After one application of compost tea, its microorganisms quickly broke down the urine, eliminating the odor almost instantly. Ocelot urine is bright yellow and highly visible on trees that have been sprayed by the cats. After applying compost tea, the urine color appears to vanish and the odor is completely controlled.

The cattery began to be well attended again as a consequence of the vast improvement in smell.

In fact, some ocelot kittens were born and the increased attendance to the cattery generated over $250,000 dollars in just six months! Woodland Park Zoo now determined that they would save another $1,000,000 in expenses over a decade. $2,000,000 in savings was generated just from the use of compost tea which can be produced for about $0.25 per gallon.

Putting It To The Test

As ocelots mamas are extremely protective of their kittens, zoo staff could not enter the exhibit for 6 months after a new litter was born. This 6-month period allowed for an E. coli buildup of over 40,000 CFUs.

Once staff could again access the ocelot exhibit, one of their first actions was to apply compost tea.

The result? Levels of E. coli dropped to close to zero.

This happened several more times with the arrival of more litters of kittens. Each time the levels of E. coli in the substrate rose for the six–month period, it dropped significantly when zoo staff applied compost tea.

Woodland Park Zoo now includes compost tea in all of its animal exhibits including those of birds, snakes, cats, monkeys, goats, and lizards.

The beneficial biology in compost tea helps to keep mold and mildew under control in moist places like the bird displays. And as in the ocelot habitat, it also provides odor control in all of the exhibits as its microorganisms break down urine and feces from inhabitants.

Compost tea works to improve anaerobic conditions that come about under circumstances within the majority of displays. Animal exhibits are constantly sprayed down with water to wash fecal matter and urine off of plants, rocks, etc.

This leaves many displays prone to molds and various other harmful microbes. But using compost tea keeps them in check.

Animal health has improved with the addition of compost tea to habitats. Some of the zoo’s mountain goats were experiencing avian tuberculosis that is caused by a mycobacterium.

After regular applications of compost tea in the goat habitat, the problem cleared up on its own.

Clostridium is an anaerobic bacterium which includes a number of pathogenic species including tetanus, gas gangrene, and botulism among others.

Both the snow leopards and the sloth bears began showing clostridium-related health problems. Compost tea applications alleviated those issues too.

Woodland Park Zoo’s Animal Health Department has gone on to adopt the use of compost and compost teas for all exhibits in the zoo.

Every six to eight weeks, compost tea is applied to a particular exhibit. Tuesdays are compost tea days at the zoo. Each Tuesday, chief horticulturist Katrina Lindahl brews up 50 gallons of compost tea and distributes it amongst the zoo exhibits.

It’s not just compost tea. Once every three years, the zoo adds compost itself to exhibits to introduce more beneficial biology.

All of these improvements make for healthier habitats all around. Healthier environments mean more robust animals and plants. Isn’t that the goal of a zoo all along?

Give It a Shot Yourself!

Woodland Park Zoo is a jaw-dropping example of what compost tea has to offer beyond producing lush, green lawns and hardy ornamental landscapes. If compost tea can save two million dollars over a decade for a zoo, imagine the cost savings if cities, counties, and municipalities incorporated compost tea into their environmental regimens.

The best way to convince people is to show them proof.

There’s no need to wait for your township to use compost tea. We can’t promise you’ll save $1,000,000 like Woodland Park, but you can start on your own property and show your neighbors what can be accomplished with compost tea!

This article was co-written by the Urban Worm Soil Biologist Troy Hinke, a Soil Food Web trained expert in soil microbes. Check out his What’s Brewing Podcast on Apple Podcasts and Spotify.

If you want to know if your soil is appropriate for your crop, or if you need help our help with anything else, engage our services today!