As if the potential “ick factor” with worms wasn’t enough, some vermicomposters have moved beyond earthworms to eradicating organic waste with the Black Soldier Fly Larvae, a nice way of saying maggots.  I resisted learning more about BSFL because a man in the suburbs has his limits. 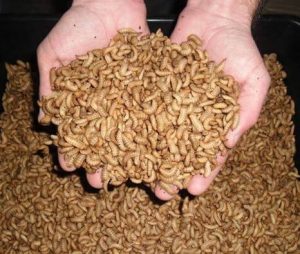 Many vermicomposters I speak to, especially those in warmer climates, encounter BSFL in their bins by accident.  At some point, the Black Soldier Flies themselves found themselves a nice worm bin, laid their eggs and left, only to die themselves no more than 8 days later.

But it wasn’t until my friends Larry Shier and Quoc-Huy Nguyen Dinh each separately began writing about BSFL with Larry taking a more academic angle by writing a highly enjoyable book about BSFL’s potential for waste mitigation while Quoc has documented his own experience with them, both on his site at The Little Worm Farmer , via his really cool online magazine, and his own how-to e-book aimed at getting people started with BSFL.

BSFL end up spending precious little time in the “fly” stage.  The adult Black Soldier Fly didn’t exactly win the Darwinian lottery as it lacks a mouth, believe it or not. Not being able to eat, it spends its last few days breeding and laying eggs before, predictably, starving to death.

Under ideal conditions, these eggs grow into larvae in about 4 days, spend at least two weeks in the larval stage before becoming pupae, then finally adults, where they spend their last few days in increasingly hungry copulation.

As it turns out, Black Soldier Fly Larvae are ridiculously effective composters!

For instance, here’s a side-by-side of Quoc’s bin. 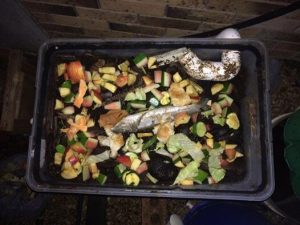 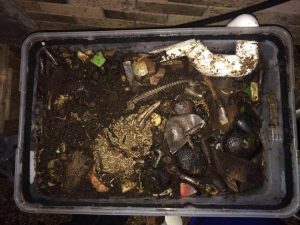 A couple things to note here though.

Find the fish in the photo on the right. Gone. As you know, fish in a worm bin is a bad idea.

And the time between these two photos? 8-12 hours.

If you’re still not convinced, check out this video of BSFL destroying a couple fish.

It’s pretty gross, in an awesome sort of way.

Newer vermicomposters – and I still consider myself in that category – need to overcome a couple common misconceptions about our vermicomposting bins to fully appreciate BSFL.

BSFL is a Partner For Sure

Now if your objective is to harness the BSFL and possibly raise them, you’ll need a specialized bin like Quoc shows us here. But if they have found their way into your worm bin, there’s no reason to pull them out.

In fact, I’ve learned their frass (which is another fancy word for poop) makes an excellent food for your worms, so there is some serious recycling going on in a bin with both composting worms and BSFL, so much so that I can imagine you’d struggle to find enough feedstock in a worm bin with a lively BSFL community.

To boot, the BSFL themselves make an excellent source of protein for chickens, fish, and other animals while their oil content makes them a candidate for production of biodiesel if production can reach scale.

Exactly how to grow and use BSFL effectively is beyond the scope of both this article and my own knowledge.  But if you’re interested in how BSFL can process your own household waste (to include meats, which is pretty cool) or even how BSFL can be applied to larger-scale municipal waste mitigation, then I recommend Larry Shier’s book, Black Soldier Fly: Eco-Technology for a Sustainable Future and following Quoc’s progress at The Little Worm Farm and maybe even pickup his own book, A Guide to Composting with Black Soldier Fly Larvae. 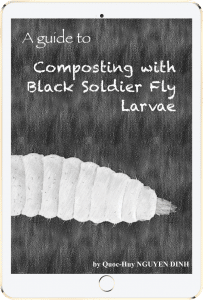