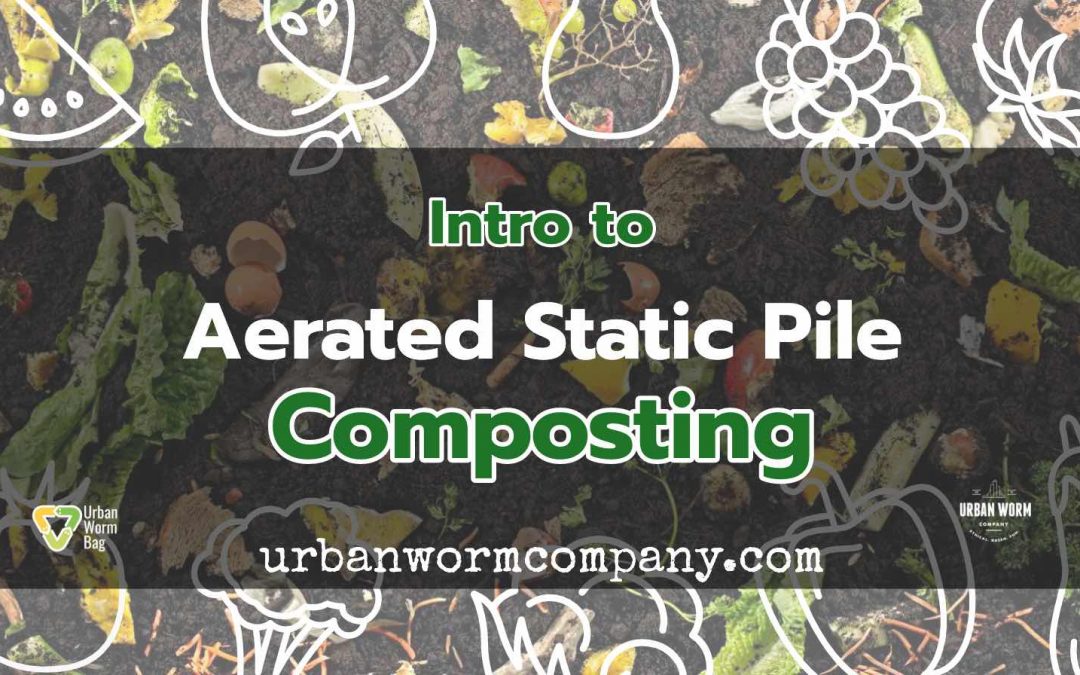 Vermicomposting is a wonderful way to mitigate our impact on the waste stream. But hot composting using the aerated static pile method is the most effective means to stabilize large quantities of organic matter, especially in a smaller space.

This article is an introduction to aerated static pile composting and will discuss:

And we’ll close out with a description of my own custom ASP system at the Urban Worm Company and my own first couple weeks of operation before pointing you towards some helpful resources for learning more about aerated static pile composting.

What is Aerated Static Pile Composting?

Composting is – or at least should be – an aerobic process.

And the air typically delivered by perforated pipe or pipes at the bottom of the pile keeps the pile oxygenated which expedites the normal composting process. It also maintains the population and diversity of beneficial oxygen-consuming bacteria and has the benefit of controlling the foul odors that anaerobic composting emits.

The air is delivered on a preset schedule that can be tweaked according to the wishes of the operator, but a typical cycle is 30 seconds on, 30 minutes off.

In the most basic terms, an aerated static pile has 5 components: 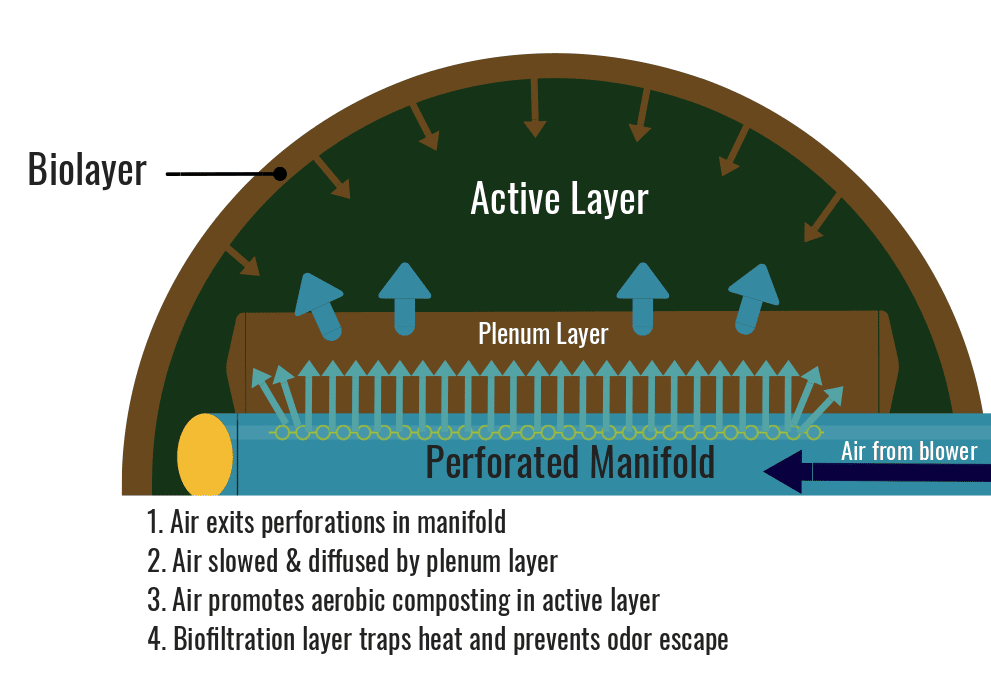 The blower and timer I received from O2 Compost is a simple bounce house blower and an analog cycle timer with simple dials to allow you to control the on/off cycle to your liking.

For anyone who is operating at the community composter level and below, this blower/timer combo is likely to be sufficient.

Some aerated static pile composting systems operate on negative pressure, meaning air is sucked through the system. These operations tend to be larger and more advanced.

The manifold is the piping that takes the air from your blower to the pile and will often have several points at which it branches for the purpose of feeding several bins. For a multi-bin or pile system, you will need some fairly expensive on/off ball valves to prevent expending airflow on piles that don’t need it at the time.

In my case, there is a single manifold splitting into 3 underground manifolds, each of which can be opened or closed with a shutoff valve.

If the pressurized columns of air escaping the perforated manifold piping were to come into contact with the active material, you would risk drying out several different pockets of your composting material.

You could also experience “short circuits” where the air fights its way through the core or up the sidewalls, allowing an easy escape for the air behind it.

To prevent this, an air plenum layer, often a simple layer of wood chips, is laid atop the perforated manifold. It diffuses the air and delivers a more uniform air flow to the entire pile.

The active layer is comprised of whatever material you’re planning to compost, whether it’s high-nitrogen food waste, manures, or other organic waste.

So your high-nitrogen waste still needs a carbon source like wood chips, wood pellets, etc to raise the C:N in order to be composted effectively.

A biofiltration, or ”bio” layer is a simple covering of mulch or finished compost surrounding the active core which protects the pile from heat loss and pests. It also reduces the escape of any foul odors that may emanate in the crucial first few days of the composting cycle.

Adolescent humor alert: For those of you who are familiar with “dutch ovens“, the bio layer is the sheet that traps the heat and odor.

In an ASP operated using negative pressure, the air itself is often pumped into a biolayer as seen in the graphic below. 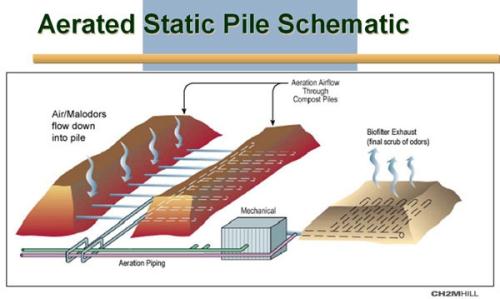 Why Would You Need an Aerated Static Pile System?

Aerated static pile composting is an effective method to accelerate and manage the composting process with much lower risk of foul odors.

Because of the decreased compost cycle time, an ASP can be a space-efficient way to compost large volumes of waste fairly quickly. And it can do it in colder climates that might not be as conducive to year-round composting.

In the context of vermicomposting, home vermicomposters do not need an aerated static pile in order to produce food for their worm bin. Even many of the larger commercial worm farms in the US use windrows (long piles) turned by a compost turner in order to perform “pre-composting,” which is the preparation of organic waste by incompletely composting material.

Pre-composting kills pathogens, releases heat, and reduces volume like normal composting. But by interrupting the process near the end of the hot cycle, sufficient food value is retained for the worms without the risk of the organic material heating up again.

ASP piles are easily monitored and the process can be managed by adjusting the blower timing to meet the needs of the large-scale vermicomposter.

I am not – and likely never will be – a large-scale vermicomposter. Yet I just built my own ASP.

Well in my work in marketing the Michigan SoilWorks CFT, we often have potential clients who are thrilled with the idea of large-scale vermicomposting, but aren’t yet educated about how to handle large-scale waste before feeding it to the worms.

So at the very least, learning about composting was an imperative. But because I have had a few clients come visit Urban Worm HQ, I want to showcase what an ASP can do in terms of waste management.

And in order to produce a consistent feedstock for my CFT, I knew I needed a manageable way to produce compost from a consistent source, in this case, horse manure from a nearby stable.

So while learning about ASP composting was necessary to help market the CFT, actually doing the composting was important to operating it effectively.

(Note: The ASP I am operating is not “large-scale.” In fact, it’s tiny. But validating aerated static pile composting as a method to prepare waste for the CFT was a must.)

A top resource for ASP plans, training, and equipment especially for the small operator is O2 Compost, in Snohomish, WA. I made contact with Peter Moon, who is a rock star in the composting world and has installed projects, large and small, all over the globe. He is simply a joy to work with.

On Peter’s recommendation, I purchased the plans, blower, and some manifold parts for the Micro-Bin. The purchase also gets you lifetime customer support from Peter!

While the Micro-Bin is a one-bin system, Peter assured me that the blower would be sufficient to operate a 3-bin system, even if two bins were being aerated simultaneously by the blower.

Because I live in suburban Philadelphia in Zone 7A, producing consistent output in the winter was going to be difficult. So again on Peter’s recommendation, I opted to install my aerated static pile composting system indoors in a horse stall in the first floor of my barn, which is conveniently adjacent to my CFT.

As this horse stall measures 12 x 14ft, I had to decide how I wanted to divide the space. I had enough space for two large bins or three smaller ones. I chose the 3-bin option and with the help and guidance of my employee Mark, a retired engineer, we dug the initial trenches for the underground manifolds and poured the footers for the ASP walls.

We built up the bin walls using cinder block and mortar, ultimately capping the top with 2×8 treated lumber. For the front of the bins, I wanted a strong, but attractive “face” of the ASP, so using a 1×4 lumber sandwiched between 2×8 lumber, we were able to create a cavity in which to slide composite Trex slats repurposed from a patio renovation to finish out the front of the ASP.

And I think it looks great! 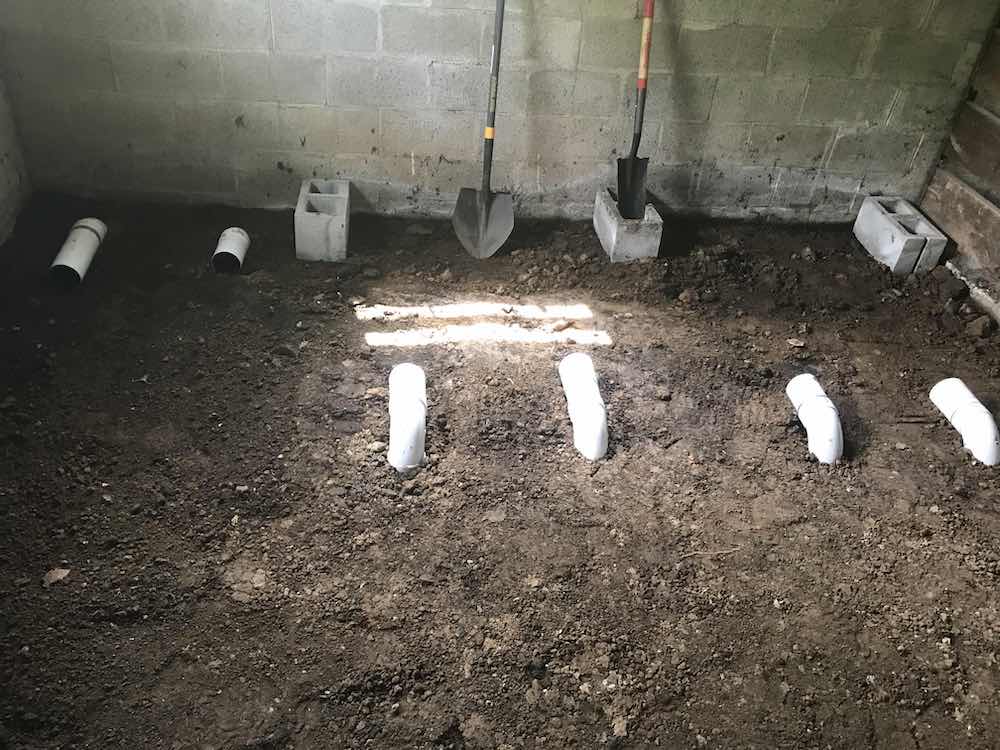 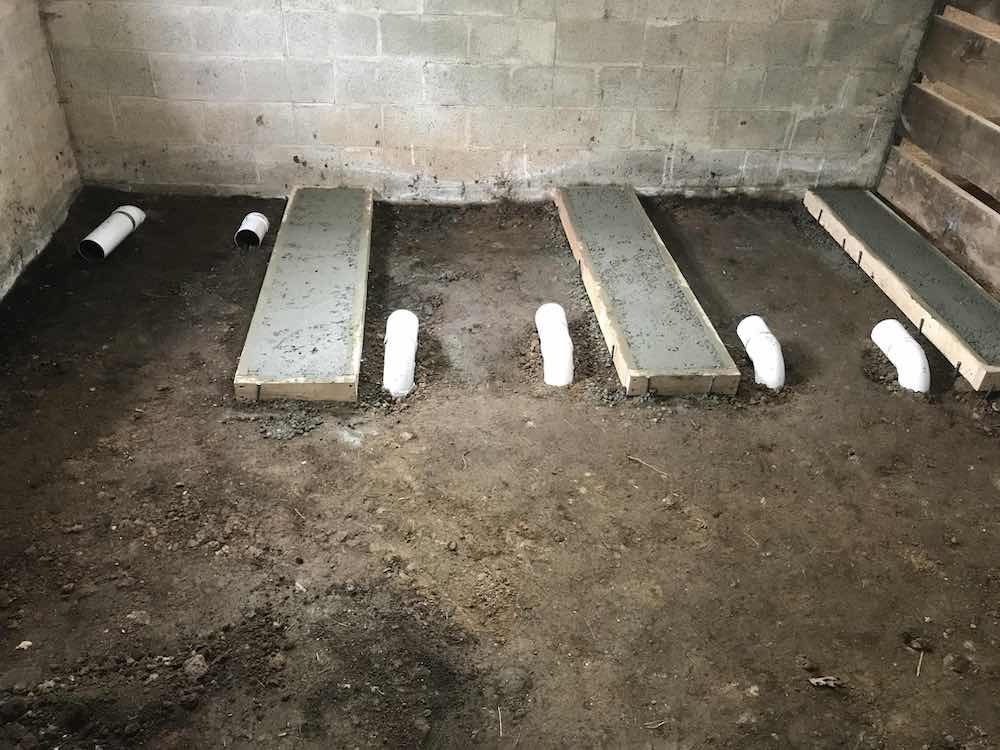 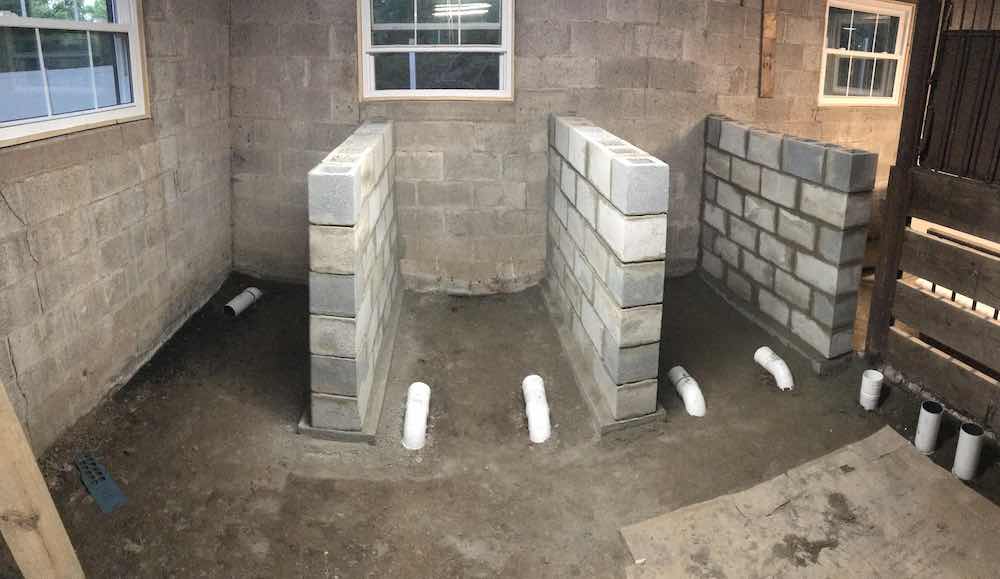 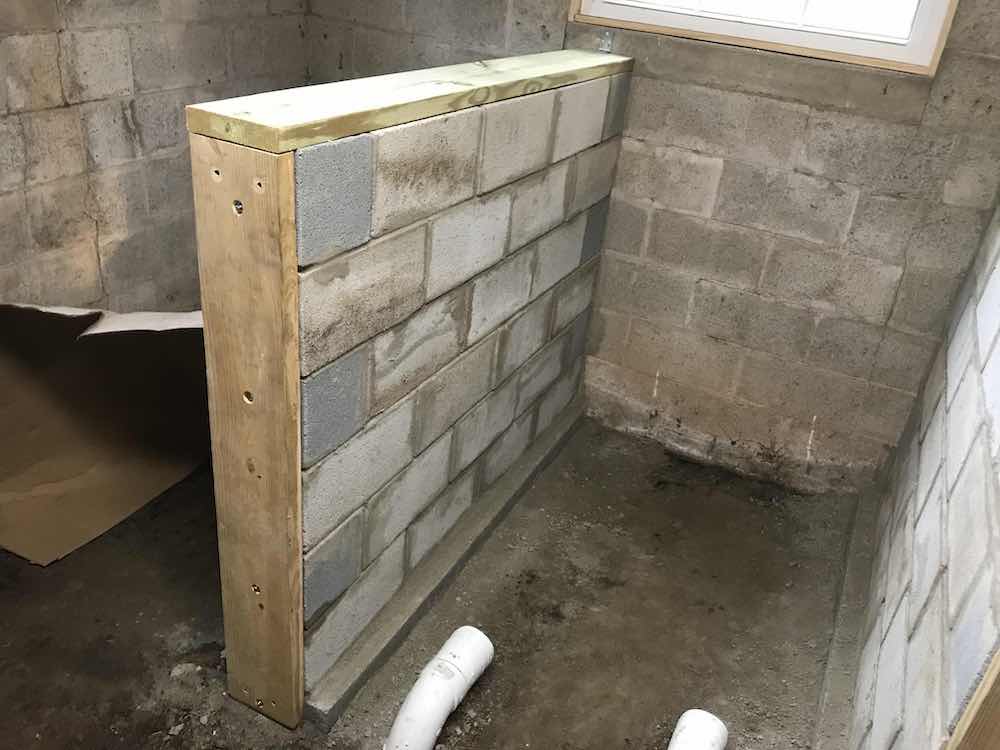 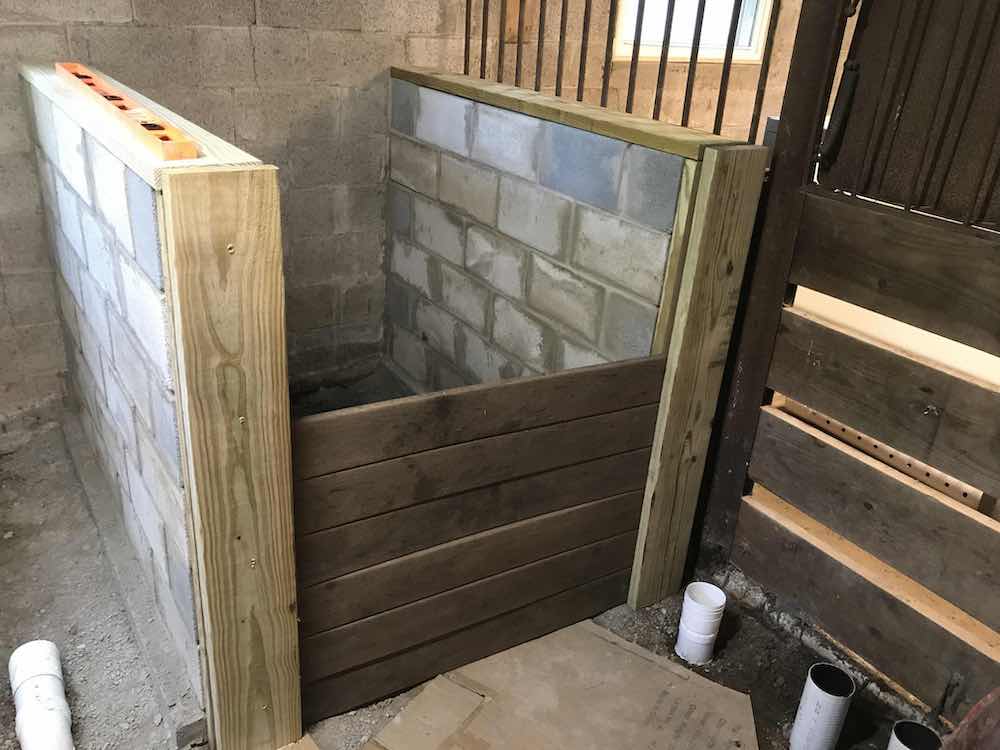 Exhaust vents are drier ducts connected to PVC. Air is extracted via 4-in inline fan.

But the challenge with an indoor system is the moisture generated by the composting process. While not a problem in an open-air environment, releasing hot vapor into a wooden barn could spell disaster for the structure in the long run.

So I opted to enclose my bins and rig up flexible dryer ducting to a PVC manifold which uses a sweet little 4-in inline ducted fan made by Cloudline in order to extract the heat and moisture generated by my system and push it outdoors.

As of the date of this writing, this method of extracting humid air seems to be working well. But I still struggle to keep the condensation from pooling inside the fan which could reduce its lifespan.

But so far, I am thrilled with the ASP!

The Urban Worm ASP: Lessons Learned in the First 14 Days

Compared to my first efforts at other endeavors, this ASP has been an unmitigated success!

But it hasn’t come without some lessons learned. 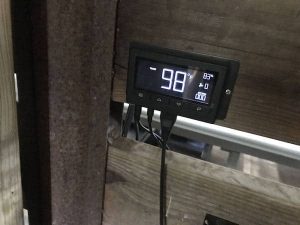 I was likely drying out the compost with excessive airflow.

And I assume that this dryness caused my compost to fall below 50% moisture content and cease the composting process as my temperature collapsed to 100°F from about 130°F in about 2 days’ time. This happened about 7 days into the thermophilic heating period which ought to last 21 days or so.

So we know the excessive aeration likely dried out the compost, and we may  not have started with enough added water in the first place, but we needed to fix the moisture …and fast!

This is counter-intuitive, but excessively dry compost will become hydrophobic and will not absorb water. If left too long, the pile would have dried to the point where I would have had to take it apart and rewet the contents before piling it again in the ASP.

Thankfully, we have been monitoring temperatures daily and were able to detect the collapse in temperature and add more water quickly. 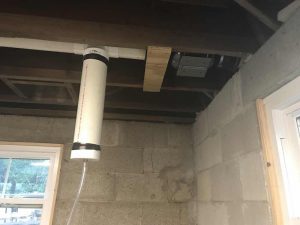 Placing an ASP indoors came with challenges…and we expected them! While we were on the right track in installing the inline fan, we made two mistakes: we installed the fan too close to the ASP and we did not have a way to catch the condensate that formed inside the exhaust manifold.

This caused condensate to form inside the manifold and collect in the fan section, which would have severely shortened the life of our fan.

On the suggestion of Michigan SoilWorks owner Dan Lonowski, we moved the fan farther away from the ASP and placed a PVC tee upstream of the fan with a narrow drain tube to carry the condensate away. The distance of the fan allows the hot vapor to cool and become liquid, while the tee is effective in trapping the moisture before it can pool in the fan.

A week after this modification, so far so good!

I recommend his system so please let him know I sent you!

I met the author James McSweeney at a composting conference in New York City and I have to say I think he’s the Rain Man of composting! This book has been an incredible resource for learning more about aerated static pile composting.

If you’re interested in a mid-scale composting project or want to start a small composting business, then this book needs to be on your bookshelf!

If you’ve got a large project in mind – and a large budget – then Green Mountain may be for you!

Green Mountain designed the 27th Ave Composting Facility in Phoenix. I visited this facility in early 2019….and wow!