This page is dedicated to answering nagging 101-level questions about certain terms within vermicomposting, which can be a very lingo-heavy pursuit and somewhat intimidating to newbies

AACT stands for actively aerated compost tea, a microbe-rich liquid made from compost or vermicompost that has undergone an hours-long aeration process to oxygenate the liquid to boost microorganism populations.

Anaerobic is the quality of lacking oxygen. Anaerobic vermicompost can be identified by a foul odor and is often densely compacted, thus preventing the medium from being exposed to sufficient oxygen levels. 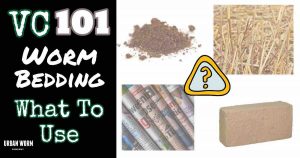 Read more about what you can use for worm bedding.

Bokashi is an anaerobic form of composting using inoculated bran to help ferment organic waste that may not be suitable for vermicomposting or traditional composting, such as meat and dairy products. Some vermicomposters claim success in feeding their worms bokashi.

The clitellum is the the fleshy band on a worm nearer to the head and its presence indicates sexual maturity. The location, color, and texture of the clitellum are useful indicators or identifying a particular worm species.

A worm cocoon is a small capsule, often the size of a pinhead or an apple seed, which contains approximately 3 embryonic worms. Cocoons take between 21 to 28 days to hatch juvenile worms and will change color as they mature.

Compost is decomposed organic matter. Hot compost has undergone one if not several heating cycles where thermophilic microbes thrive and help to further break down the organic matter.

See this article to read the difference between vermicomposting and composting. 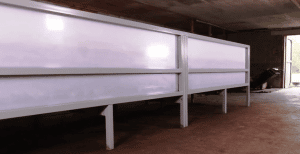 A continuous flow through vermicomposting system leverages the worms’ tendency to move into layers of food waste above, leaving their castings behind to be harvested, either manually in simpler flow through systems like the Urban Worm Bag or by the use of a mechanized breaker bar for more sophisticated worm farming systems like the Michigan SoilWorks CFT.

Part of the worm’s digestive system, just beyond the esophagus. The crop is where the worm grinds food to prepare it for further digestion

The binomial name of the Red Wiggler.

The binomial name of the European Nightcrawler.

Epigeic worms live near the surface in loosely-packed leaf litter or detritus. Most composting worms are epigeic.

Also known as perionyx excavatus, the Indian Blue Worm or “blue” is a composting worm that favors temperate to tropical climates. The Indian Blue is often confused with the red wiggler, but can be identified by its less prominent clitellum its noticeable elongation while moving.

A very close relative of eisenia fetida, the “tiger worm” is a common composting worm, especially in more tropical climates and is identified by

Leachate, often confused with worm tea, is excess moisture that has drained though a vermicomposting system. The liquid collected from the tap of a stackable plastic worm bin is leachate, not worm tea.

The binomial name of the Indian Blue Worm.

Protein poisoning happens when worms are fed a diet that is either acidic or high in protein, both of which will cause acidic conditions that lead to fermentation in the worm’s gut. Having no way to counteract the gasses from the fermentation, the worm’s intestines will rupture, resulting in the “string of pearls” appearance of a worm afflicted with protein poisoning. 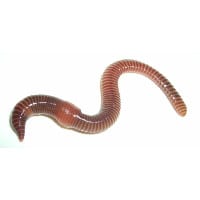 Also known as eisenia fetida, Red Wigglers are the most common composting worm in North America and are suitable for a wide range of climactic conditions.

A segment is the disc-shaped portion of a worm’s body bound together from the anterior and posterior of the worm by a membrane.

Technically, vermicast is a single particle of worm castings, but the term is often used interchangeably with worm castings.

Vermicompost is the byporoduct of vermicomposting or worm composting, normally existing of worm castings, humus, unprocessed organic materisal, and microorganisms. 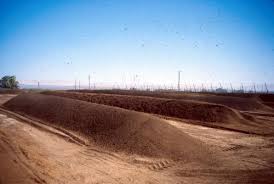 A windrow is a long pile of material, vermicompost in this case, normally heaped by a machine or manually. Vermicomposting in windrows is very common in warmer climates as it is not capital intensive.

Worm castings are worm poop! They are the excretion of the earthworm after the digestion process. Worm castings are considered a highly-potent soil amendment that enriches soil and aids in plant growth, pest and pathogen suppression, water retention, soil aggregation, and other benefits.

Worm tea, unlike leachate, is a deliberately-produced by-product of vermicompost made by suspending vermicompost in a fine mesh bag into a container of water which is typically aerated in order to boost the microbe populations within the tea.

Applied as a soil drench or foliar spray, worm tea is considered a potent fertilizer.