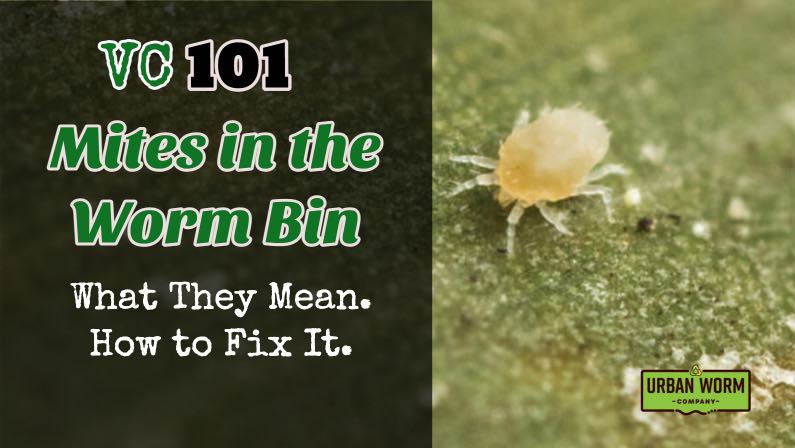 New worm bin owners often expect their worm bin to consist of worms, bedding, food waste, beautiful worm castings, and not much else.

Other critters simply weren't part of the deal.

But when you've got a worm bin with rich, decomposing food waste and humidity levels normally found in the basements of Bangkok brothels, you can't expect other organisms NOT to join the party.

Among these unwelcome invaders are mites.

This article will introduce you to mites and what they indicate as well as ways to prevent or eradicate mite infestations in your worm bin.

Mites are tiny arthropods that belong to the class arachnida, the same as spiders and ticks. It's an extremely diverse group with different species drawn to a dizzying array of environments like soil, fabric, animals, the human body, and yes…. worm bins.

While mites can be predators, parasites, and herbivores, the majority of mites you’ll find in a worm bin are detritivores, meaning they feed on dead and decaying organic matter.

In other words, mites are fellow travelers with worms; both are excellent composters.

What Do Mites Mean for Your Worm Bin?

The vast majority of mites that you’ll find in your worm bin are there because they're hungry for detritus, which is dead or dying organic matter. And mites will find this matter especially attractive when it's wet.

They'll proliferate in overly moist conditions in nature and they'll do it in your worm bin as well. So if you happen to find a couple mites around the edge of your worm bin, or even collected around a dead worm, don’t panic. This is completely natural and probably nothing to be concerned about.

Unfortunately, detritus is the same kind of food that worms need to survive and work their magic in your worm bin.

When mites are viewed eating a worm, it's likely that the worm was already on death's doorstep. Composting worms typically live around 1.5 years and a mature worm bin will have thousands of them.

So chances are several worms are dying each day, themselves becoming food for mites in your bin.

But I've seen plenty of images like this one where mites appear to be munching on a chubby worm in its prime, so I won't promise that they're always good guys.

While there are thousands of different types of mites, the types of mites most like to be found gallivanting your moist, rich worm bin will either be of a white or a reddish color. They will be very slow moving.

And you won't see just a few here and there. You're going to clusters of hundreds or thousands of them, often covering the entire surface of organic matter they find attractive.

How to Prevent Mites in the Worm Bin

One of the best ways to prevent your bin from being overrun with mites is to make sure that the internal environment doesn’t get too moist, as mites love environments with high moisture. There are a couple ways to do this:

By keeping your worm bin from getting too moist, you should be able to prevent mite populations from growing to annoying levels. But if necessary, there are a couple ways to remove them from your worm bin.

How to Get Rid of Mites

If you’ve kept the moisture levels in your worm bin fairly regulated, you will probably still find these little buggers setting up shop in your worm bin. While a few mites sharing the food source with your worms is fine, there are ways to remove them if they overstay their welcome.

Firstly, if mites are congregating on the aforementioned foods, simply remove that mite-infested food by hand.

Mites typically prefer wet, rich foods like pumpkin, watermelon, and canteloupe and will gather around those foods when possible. (See here for a helpful rundown on the moisture contents of various fruit and veggie wastes.)

Reddish-brown mites, for instance, seem to love watermelon rinds. Simply remove the type of food that the mites seem to prefer and it should lead to a noticeable decrease in their numbers.

Mix some food grade diatomaceous earth into your worm bin. This organic material, made from the fossilized remains of small aquatic organisms, will kill off mites without affecting your worms’ health.

Conclusion: Mites Are Nothing to Freak Out About

Look. You're trying to maintain conditions in a worm bin with high levels of humidity, all the while adding food waste that will often have water content north of 85%. It's going to be hard NOT to encounter mites from time to time.

And they *are* effective decomposers, so if you're a glass-half-full vermicomposter, you might even see them as a complement to your worms.

But to the extent that you view them negatively, you shouldn't seek to eradicate them because you don't want mites. You should ultimately seek to adjust the conditions that they found so attractive in the first place.

If you're new to vermicomposting or you need a bit of a refresher, then run – don't walk – to read the Ultimate Guide to Vermicomposting. It's a comprehensive resource to set you on the path to success with worm composting!

Winter Vermicomposting: How to Keep a Worm Bin Warm When It’s Cold