A common sighting in outdoor compost piles in the upper Midwest and Northeastern US is an earthworm that’s doing quite a bit of damage to the health of our forests. 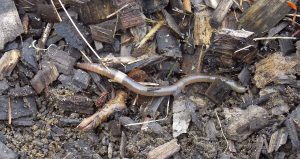 The amynthas agrestis is a cousin of the Alabama Jumper, or amynthas gracilis, and while it appears to be an active vermicomposter, it is actually a huge concern for forest and wildlife officials who are concerned on its effect of depleting the forest floor of vital nutrients.

Oddly enough, it was this very worm that got me interested in vermicomposting in the first place.  I was turning a cooling compost pile, trying to get one last “cook” for the summer and I was stunned at the number of these odd worms I found.

In summary, here are their characteristics:

I thought the the natural occurrence of these worms in a compost pile would make them good vermicomposters in a controlled setting, but this is not the case.  They don’t seem to reproduce in normal vermicompost bins and don’t swarm food waste the way red wigglers, Euros, or Indian blues do.

They pretty much just like the leaf litter and detritus in wooded areas, which is why officials are so worried.  While all vermicomposting worms are alien to the United States, the amynthas agrestis or “crazy worm” is a particularly harmful intruder because as it consumes the covering of leaves on the forest floor each year, it is depriving surrounding trees of their natural replenishment for the following year.

It can be argued that while nearly all earthworms are alien to the northern US (due to being wiped out by the last Ice Age), this one is particularly worrisome.  Wildlife officials believe it is outcompeting other species and is a more voracious eater of the detritus that makes up the top layer of the forest floor.

But don’t be fooled by these worms.  They suck!

This is not a worm you should reproduce or employ in any sort of vermicomposting capacity. Depending on where you live, it may even be illegal to use them in any way.